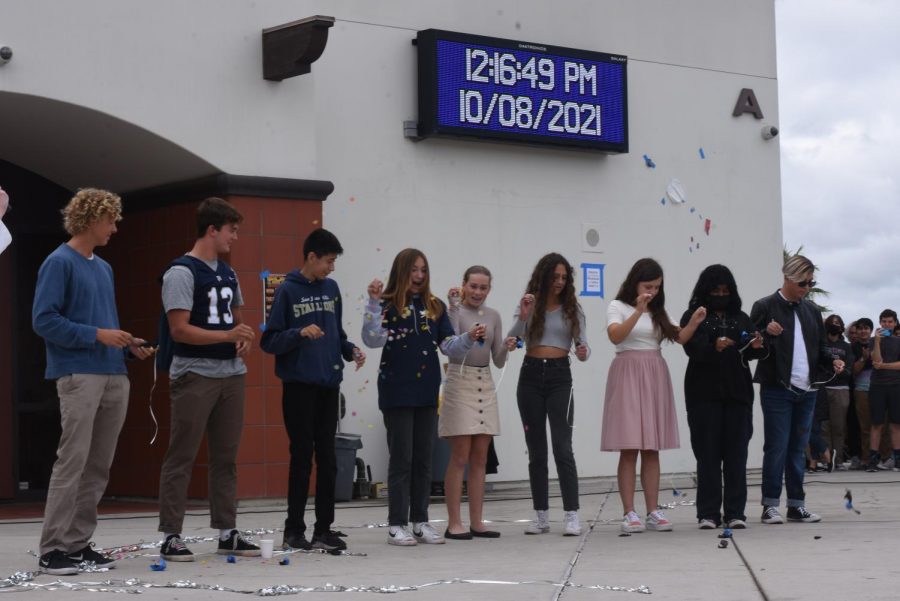 Does Homecoming Court Still Represent How We RFTB?

Homecoming Court is a Valued Tradition

The selection of the homecoming court is a well-established tradition that holds great significance.

The homecoming dance tradition has been around since the twentieth century, originating around the 1930s. Originally, those elected for homecoming court were seniors recognized as role models for schools. The court consists of several boy and girl candidates who are voted on and selected by students.

So, what’s the actual purpose of homecoming court? While many think homecoming court is  no less than a popularity contest, the tradition has notable importance. The court is a special part of homecoming where students get to choose those who they think will reflect their class the best, or who deserves to be an honorable representative.

“I personally think that homecoming court is important because it gives everyone an opportunity to model what a true high school student is. The best part of homecoming court is anyone and everyone can be voted in. Not one student has to feel like they don’t have a chance,” said junior Siyona Shah.

While homecoming court offers an opportunity for representation and “modeling,” some might say that the tradition sticks to outdated stereotypes and is gender-exclusive. The dichotomous view of gender which categorizes candidates into explicitly male and female pairings of kings and queens provides no room for neutrality and open-mindedness of other gender roles in our society today.

In the future, it’ll be extremely important to make the court gender-neutral in order to continue, respectively and mindfully, honoring the homecoming tradition. With that being said, changes are important and necessary, but that doesn’t mean we should eliminate the tradition of the court completely.

To minimize the “popularity contest” aspect of homecoming court, there are many ways voting can be modified to be more inclusive of everyone on campus and to give everyone the chance. For instance, by including school staff in voting, some students that might’ve not received votes otherwise will get the opportunity to be included.

“We could incorporate teacher votes because they know students more personally. While deciding, they could consider how good of a student the person is,” said senior Jenna Huff.

Generally, with modifications and reinstated rules, homecoming court can become an even more meaningful tradition. The homecoming court is extremely important to homecoming and the tradition should continue to be honored for what it represents among students and for the school.

Homecoming court is an outdated school custom that does not uphold what SJHHS stands for. The volatile tradition needs to change, or needs to be abolished.

When SJHHS rebranded their acronym for “BRAND,” the administration and student groups worked extensively to create an inclusive statement that would speak to the student population. Specifically, the letter “R,” which addresses how the school will support and represent diversity on campus.

Homecoming court does not act for students of all backgrounds by any means.

For instance, when a student places their nominations for homecoming court, the voting platform separates students into two gender-exclusive categories: king or queen. However, many students don’t feel they truly fit into either label.

“The whole “king and queen” thing is archaic and I don’t believe it fully represents who we are as a class,” said non-binary junior, Lennon Hodges.

Not to mention, homecoming court reinforces a social hierarchy that elevates the status of a few, but the insecurities of many.

“A lot of people look forward to getting on the homecoming court throughout all of their high school years and never get nominated. I find the whole tradition of it pretty distasteful. Even if it is a bit sad that something so trivial could disappoint some people so much, that disappointment could easily be prevented if the outdated tradition was just finally put to rest,” said senior Hayley Wilson.

The tradition places “popularity” on a pedestal. It sends the message that outside appearance trumps intellect and values. It makes students feel as if they need validation through the votes of their peers in order to find contentment.

Ultimately, homecoming court is a popularity contest. It’s a race to see who has the biggest friend group, or the greatest follow count on Instagram. It unnecessarily places too much value on looks, and not enough in the merit of the entire student body.

“I think the idea of homecoming court gives those that are nominated…too much of an opportunity to gloat on their own success and gain some sense of superiority to everyone else, just for gaining more popularity,” said Wilson.

At the end of the day, our students should find self worth in their caliber, not what society wants them to conform to. Unless modifications are made, it needs to go.