A San Juan Hills High School family describes their ordeal with Covid-19, how they managed an their advice to others to avoid the same predicament. 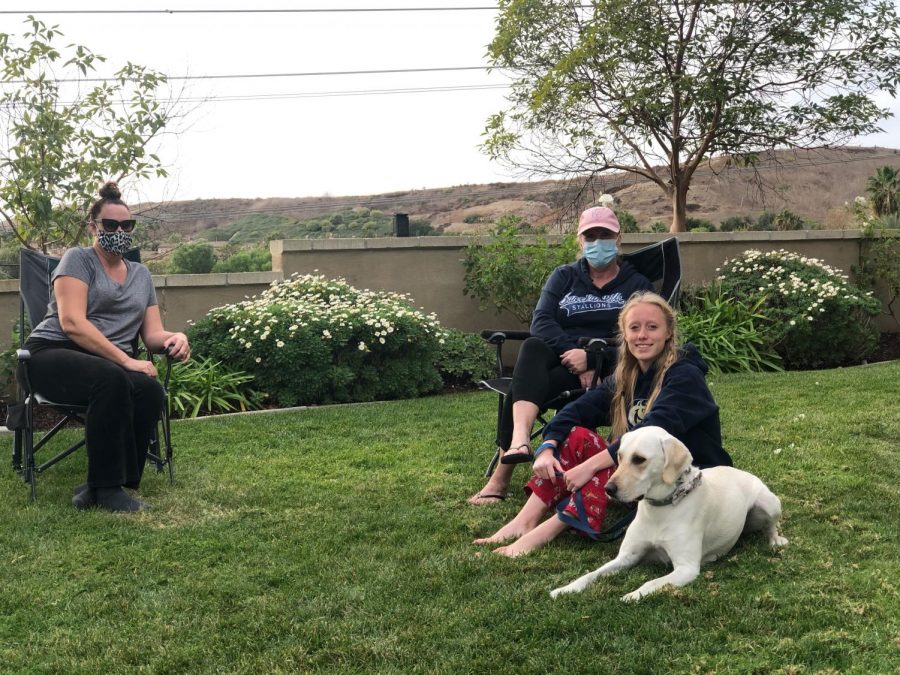 The Croy family quarantined in their backyard with their neighbor, who also contracted the virus. The Croy’s spent most of their 14-day quaranting period inside their own home, only occasionally going in their backyard to get a breath of fresh air. Everyone in their family, excluding their youngest son, all tested positive with varying effects for all of them. While the entire family did survive, they continue to wear masks and stay socially distanced in order to ensure that other families don’t have to go through what they did.

Sophomore Riley Croy and her family were one of the many at San Juan Hills that experienced the effects of COVID-19.  Despite her family being socially distanced and wearing masks prior to the infection, the Croy family still contracted the virus.

“I basically only left the house to go hiking with my dog and go to the grocery store with my mom. The whole family social distanced, used masks, and followed the rules . . . We have no idea where we got it from because that week specifically we had only left the house to grab groceries, we just watched movies and had a calm week,” said Croy.

Croy and her father first showed symptoms on May 31st and June 1st. A few days later, her mother began showing symptoms, but her brother did not contract the virus.

“My dad lost his taste on May 31st and the day after, I started to have symptoms. I woke up June 1st with a scratchy sore throat and a headache,” said Croy. “My neck and eyes felt super stiff and they hurt to move; it felt like when you have a bad sinus infection/cold. The overall experience felt like the flu, strep, and a sinus infection together.”

After talking to a doctor, Riley and her family took COVID-19 swab tests and got the results in about a week.

“We weren’t surprised when we found out we had COVID because my dad was in the hospital by the time we got the tests back. When he was admitted, he had to take two rapid tests. Both were negative for COVID, but my dad was in such bad shape that he was admitted anyways. Obviously the rapid tests were false negatives and his normal test came back accurately as positive,” said Croy.

He said that it was lonely and tiring. He was in the hospital for five days. He saw his doctor through facetime and that’s it”

While her father was in the hospital, no one was in physical contact with him. Croy and her family were not able to see him, leaving her father in complete isolation.

“He said that it was lonely and tiring. He was in the hospital for five days. He saw his doctor through facetime and that’s it,” said Croy.

While their doctor recommended them to quarantine for two weeks, Croy’s family quarantined for three weeks. After her father was hospitalized, Croy’s neighbors also were infected with COVID-19.

“Since we all had COVID, we would sit outside in our lawns to enjoy the fresh air and talk about new symptoms we had or how we felt,” said Croy.

Thankfully, Croy’s other neighbors would bring back groceries for the infected on the street, and her friends would cook them dinners.

“It was super nice and thoughtful of them, and I do not know what we would have done without them,” said Croy.

While Croy’s family managed to survive the virus, COVID-19 has had lasting physical effects on her and her father.

“I still don’t have my smell and taste back all of the way. A lot of things taste different, like lemon, if I can taste it at all. My mom has her taste and smell back, but it is not as good as it used to be. When my dad and I started working out again, our lungs felt small. We got out of breath quickly and it felt like our lungs weren’t filling up all of the way. It is better now, but it took a while to adjust,” said Croy.

Nationwide, more than 250,000 people have died from the virus, and this number is expected to rise to half a million people. While the Croy family managed to recover from the virus, many families are not as fortunate to overcome the lasting effects.

“We got super lucky that we were able to recover the way we did, but it could have gone a lot worse,” said Croy.

Due to their experience, the Croys continue to follow COVID guidelines, so other families don’t have to go through the same traumatic experience.

“We as a family try and do the right thing by social distancing and wearing masks when we are out in public,” said Croy. “It would be nice if everyone followed the rules, but not everyone is doing the right thing; however, we can’t control what others are doing . . . Our family has been more careful because we don’t want anyone else to go through what we did.”

The Express intends this area to foster healthy, thought-provoking discussion. Comments, which are subject to review by The Express staff before they appear, are expected to be respectful, constructive and not embarrass or ridicule any person or group of people. Comments made here may appear online and in our print edition with a response. The Express does not allow anonymous comments and we require a valid email address. The email address will not be displayed, but will be used to confirm your comments.

If you want a picture to show with your comment, go get a gravatar.