Masks Up in Flames 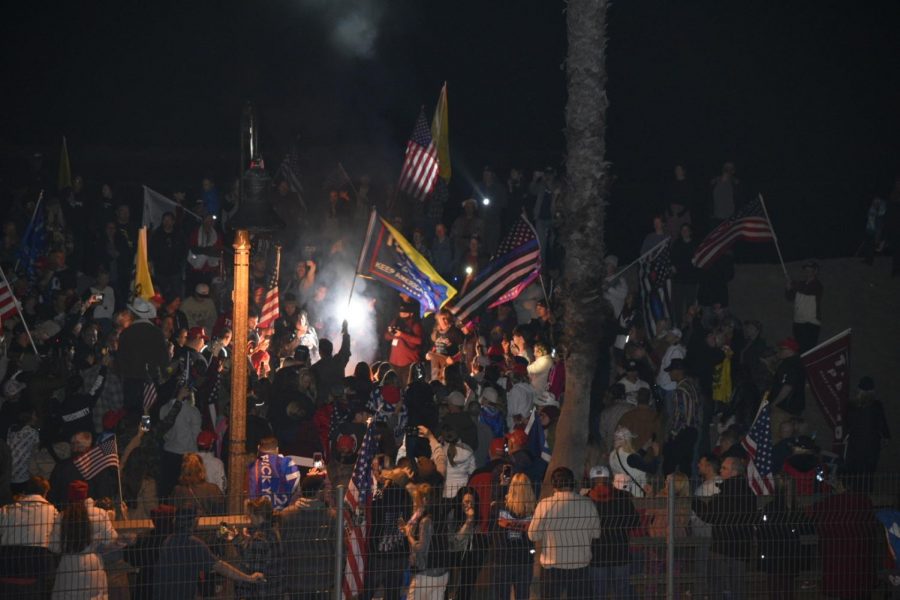 Thousands of protestors across the state of California attended “Curfew Breakers” rallies in response to the 10 pm curfew announced by Governor Gavin Newsom. Protestors at this event near the San Clemente burned masks, signaling not only a frustration with public health regulations, but also a denial of the seriousness of the worsening pandemic.

Hundreds of protesters gathered along the San Clemente Pier on the evening of Saturday, November 21, in response to the 10pm curfew that Governor Gavin Newsom instituted. Donning Trump paraphernalia and burning masks, the crowd served as a demonstration of how our community’s political division is at an all time high as a result of the pandemic.

This demonstration was spearheaded by the American Phoenix project, which was founded at the onset of the pandemic, says their actions and rhetoric respond to the “fear-based tyranny” of lockdown restrictions. The organization even states that their goal is a “Second American Revolution,” to heal our nation and institute a more ethical government.

Russ Taylor, a member of the board of directors at the American Phoenix project, gave more insight as to why he and like-minded individuals feel the need to protest and stand up to Covid lockdowns, especially in the wake of controversy surrounding the Presidential election.

“The actions of Gavin Newsom go directly against the Constitution and our freedoms. That is where we have an issue,” said Taylor.

Taylor’s words are emblematic of how fundamental principles of individual liberty and freedom have merged with our nation’s response to a public health crisis as severe as the coronavirus. According to the American Phoenix Project, the idea of a large scale, organized effort to contain the virus goes against core values of small government and personal autonomy. Therefore it is easy to conclude that America’s political heterogeneity is correlated with its inability to control the pandemic.

However, conflicts with personal liberty and the safety of others are likely to occur when a quarantine is instituted. Nevertheless, a highly contagious virus is surging, and this is a matter of life and death.

“Given the fact that the coronavirus has a 99% survival rate and it is still dominating our lives is really a travesty of this year. The fact of the matter is that people die all the time, it’s sad, but there are many instances,” said Taylor.

It is true that the survival rate from Covid-19 has stayed in the high 90s, but elderly and even middle-aged individuals face a far greater likelihood of death. For example a 50-year-old is 30 times more likely to die of Covid than a 25 year old, and a 65-year-old is roughly 90 times more likely to perish compared to a 25-year-old. Furthermore, Taylor’s values extend to even the most basic health precautions.

“I am fine with people wearing a mask if they choose to, but the moment I am being told I must wear my mask if I leave my front door is where I and many other people have a fundamental issue,” said Taylor.

For better or for worse, Taylor’s words have been echoed across America, including President Trump’s reluctance to wear a mask. Ironically, it may be Taylor’s and other voices on the right’s commitment to preserving freedoms and growing mistrust of the government that keep our country in a pandemic standstill.

In addition to condemning mask mandates, right-wing extremists have shown skepticism towards vaccines that cannot be substantiated with evidence. “If you have a vaccine that is built inside of a six-month period there’s no way I am taking that,” said Taylor.

The bottom line is that our country’s economy cannot operate at full capacity until either a critical mass of the population has been vaccinated, or herd immunity is reached through widespread infection. Waiting for herd immunity without vaccination would result in thousands, possibly millions of more Covid deaths and a prolonged period of shutdown.

A vaccine is the path to reopening schools, holding concerts and large sporting events, and letting life go back to normal sooner rather than later. While Covid-19 vaccines have been developed at a historically fast rate, a cause of anxiety for some, scientists have applied new technologies, which have proven to be safe and effective in large-scale research. The risks of getting vaccinated are miniscule compared to avoiding it.

In a year that has been full of controversy and the spread of misinformation, responses to the coronavirus have been no different. Russ Taylor represents how right wing ideologies serve a purpose in our country to question change and stand up to infringement on liberty. However, during a time when the pandemic has killed over 280,000 Americans, it becomes increasingly difficult to see the logic in putting the freedom of normal life in front of the health and safety of others.