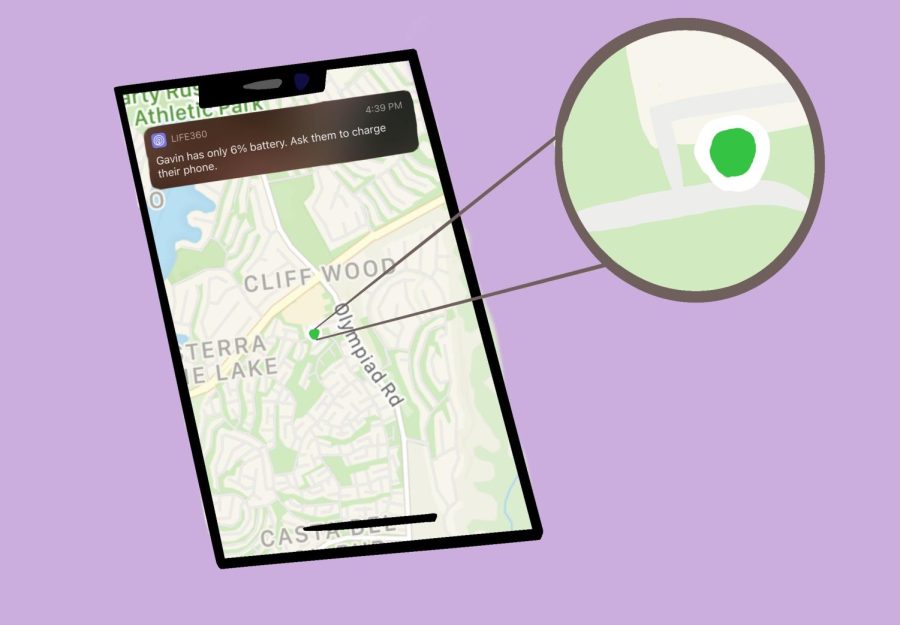 The app Life360 has been a source of discourse between teens and parents for many years due to its controversial features, including constant location tracking of all users.

A teen will hear the name “Life 360” and feel one emotion: dread.

Word association is a powerful thing, but does the apprehension toward Life 360 go deeper than just preconceived notions?

Opponents of the app describe it as a sinister weapon utilized by distrusting and over-controlling parents to regulate every aspect of a teen’s life, stifling their independence.

At first glance, this imagery has valid foundations. Life 360 allows parents to locate their child’s phone at all times, and it has features that send push notifications when one is driving too fast, or their battery is low. For many, this is too big an invasion of privacy.

Overbearing parents are no new phenomenon. They have plagued the lives of teenagers for decades. A child will have their independence restricted from such parents no matter the technology in their lives. Life 360 is certainly an outlet for such parents, but it is not the main cause for boundary and privacy issues. As a result, these issues will not be eliminated by the removal of the app. They are the fault of misplaced care and stifling parenting practices that require deeper, more fundamental solutions.

For the average Life 360 user, the app can be extremely useful. It is a tool that eases worries and gives parents and friends peace of mind.

Life 360 boasts many features that promote and increase user safety. It includes 24/7 Emergency Dispatch and Roadside Assistance, which can give both parents and teens an added sense of safety once they begin driving.

Its main feature–the tracking feature–has a lot of useful applications. Not only does it allow parents to check their teens’ locations, eliminating the need for distracting and ominous “where are you?” texts, it also permits teens to keep up with both their friends and family.

Often, teens may find their parents as busy as themselves, and it is convenient for them to easily check their locations. If one sees that their parent or sibling is near a grocery store, it is an added benefit to be able to ask them to pick something up. Teens tend to share locations amongst friend groups. This allows students to check up on their friends to see if they are busy with work or are running late.

The app eases common worries and stresses among parents and children alike, knowing that if loved ones fall into dangerous situations or become lost, they can be easily tracked. Life 360’s calming effect may even give some teens more freedom. Many parents lengthen curfews or increase freedoms when they have the assurance that they can check where their kids are.

Life 360 adds something to the lives of most modern families–comfort. The sense of security that comes with being able to locate your loved ones makes Life 360 worth the stress it may cause in some students with “helicopter” parents.

Helicopter parents, while not a new phenomenon, are now far more skilled in the borderline stalking of their children than anyone could have ever foreseen in their worst nightmares.

Life360 tries to step out of its realm as a safety app, as it tracks the location of its users while also providing driving reports of the users’ speeds and length of driving trips. As an additional feature, it also notifies users when a group member’s battery falls below 10%.

These features, while made to encourage teenagers to make safe and smart decisions, have only caused stress and paranoia between teenagers and animosity with their parents.

Teenage years are– above all– a time for learning. Without taking risks and making stupid, and yes, sometimes dangerous, mistakes, teenagers would have no way to learn and grow into adults. These years are a time for exploring more freedom and growing as an individual, yet Life360 inhibits this growth.

Letting go of children and trusting them to make the right choices can be very hard for parents, but it is an incredibly necessary step to make. Especially as teenager and parent relationships can become strained when the teenager feels as though their parent doesn’t trust them.

Constant paranoia and fear over whether your parents are going to punish you through what they find from Life360 causes more stress for children than it alleviates for parents. Life360 and its invasive nature is not necessary for safety, as there are several applications where parents can see where their children are in need of emergency.

For example, the FindMy app on iPhones gives information on the whereabouts of family members, but does not go to the extreme as to give notifications like Life360 does with information on battery life and driving patterns of its users. This offers a balance of parents knowing where their teens are in case of emergency and teens feeling more trust between themselves and their parent.

Along with the detrimental extremities,  the app’s intrusive nature puts user’s privacy at risk when using the application. In January of 2022, the company announced that they would stop sales of precise location data to over a dozen data brokers they had been working with, meaning that anybody who used Life360 before January has most likely had their location data sold to companies without their knowledge. The company continues to sell precise location data to Arity and “aggregated” location data to PlacerAI. This data collection and subsequent sales has resulted in millions of users’ privacy being breached for the profit of the corporate elites.

While Life360 means to be an app that facilitates the safety of teenagers in the modern era, its ruinous qualities allow it to be only that of an attempt. This cause is an honorable one, but Life360 didn’t achieve its goals in the way it was supposed to. Instead of facilitating safety, it has facilitated helicopter parenting and teenager paranoia. Life360’s features go beyond just tracking teens for safety reasons, and facilitates parents who wish to control every aspect of their children’s lives.