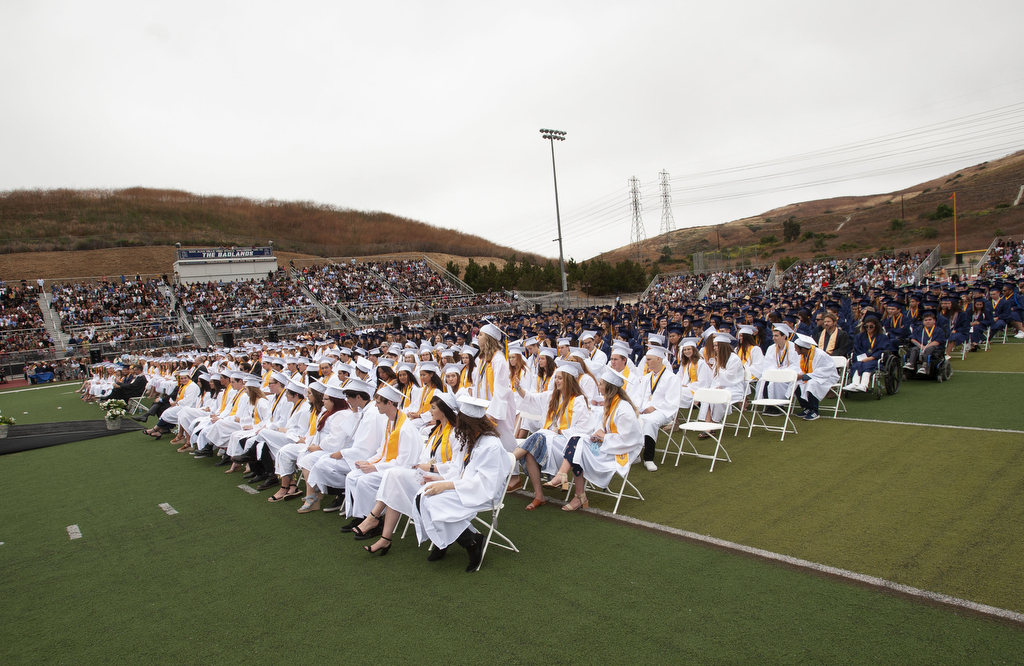 The class of 2019 graduates from SJHHS on June 6. Students who received a 4.0 or above are seated at the front in white robes, while the rest are behind them in blue. Seniors this year hopefully will get an in-person graduation with some changes to make it safe for everyone. (Courtesy of cusdinsider.org)

The class of 2019 graduates from SJHHS on June 6. Students who received a 4.0 or above are seated at the front in white robes, while the rest are behind them in blue. Seniors this year hopefully will get an in-person graduation with some changes to make it safe for everyone.

A high school graduation is supposed to be a day where students celebrate their hard work and achievements.Yet, SJHHS’ policy of separating its student body into different colored gowns based on GPA alone makes many students dread their graduation day.

Forcing kids to wear their GPA on their graduation day is humiliating and degrading, and it’s absurd that SJHHS has a policy that makes graduates feel embarrassed on a day that is supposed to be celebratory. Students shouldn’t be regretting not getting an “A” or “B” in their junior year math class, or agonizing over the “C” they got in AP European history sophomore year while they’re supposed to be stepping into the next phase of their life with their family and friends.

A GPA is often a misrepresentation of the hard work students put into their high school years. A student’s achievements in high school cannot be summed up by the number of honors/AP classes students take, or the grades they get in those classes. Many students are hard working and dedicated aside from school, in the extracurricular activities they are involved in, their part time jobs, and how they help take care of siblings or other family members.

By making the policy based off of GPA, the school is disregarding student’s achievements and commitments outside of school, grossly misrepresenting their time during high school.

A student’s achievements in high school cannot be summed up by the number of honors/AP classes students take, or the grades they get in those classes. ”

What makes the work of a student who cheated in many of their classes and got a 4.1 more deserving of a white robe than the work of a student who graduated with a 3.9 with academic integrity? What makes the talents of a star athlete or artist with a lower GPA less deserving of a white robe than someone who is better at school than sports? The extenuating circumstances that affect GPA cannot be summed up by a robe color, and by no means reflect the character or dedication of its wearer.

GPA is also greatly influenced by the resources a student has access to. For instance, students from wealthier families are able to have paid tutors, and students from lower income families may have to pick up part time jobs to help their parents. Many students have parents that work long hours, and have to help take care of their house and siblings after school. This can cut into the amount of time students have to study and do their homework, directly affecting their GPA.

A study at the University of California, Santa Barbara conducted by Rebecca Zwick and Jennifer Greif Green found that “high school grades and class rank have a larger correlation with family income and education” than standardized testing. This shows that a person’s GPA is largely shifted by how they grew up, making it less a measure of intelligence and hard work, and more a combination of multiple external factors.

While the original intent of white robes was to celebrate the students who received a 4.0 or above, in reality the policy only creates a culture where high scholers are defined by their GPA.

One main complaint that students have throughout high school is that they feel they are defined by their GPA and test scores. The fact that colleges accept students largely based on numbers is anxiety inducing, demeaning, and frustrating for most high school students.

The white robe policy only exacerbates this effect by choosing what a student wears at graduation solely based on one number.
The robe policy gives many teachers unnecessary stress. Students whose grades are on the edge of a 4.0 will approach them during their second semester, asking for a grade change to allow them to get a white robe.

This puts teachers in an uncomfortable situation, as they want everyone to enjoy their graduation, but they also can’t give out free letter grades. Undoing this policy will save teachers the unnecessary hassle that comes every March, as well as take away the stress many students who are on the edge of a 4.0 feel in their second semester senior year.

Although the original intent of the robes were to celebrate students, the white robes are differentiating the “high achieving” kids from the “not high achieving” kids, creating a negative culture. The policy makes many students feel dumb, which often overrides the pride they should feel on their graduation day. It gives the impression to many that the students in blue robes’ achievements are not as great as the students in white robes’, creating a less inclusive school culture.

In reality, the achievement being celebrated is graduation itself, not the GPA one earned throughout high school.

Different color robes aren’t the only way students can be recognized for their academic achievements. A cord, tassel or pin for everyone who achieved a 4.0 or above would have the same effect, while being more modest.

White robes don’t support the culture of inclusivity and unity SJHHS is trying to achieve. We can’t change that society, employers, and colleges use our GPA to judge us. What we can change is the fact that our school feels the need to separate us into different colors at our own graduation.

Separating by Gown Colors is not a Display of Elitism

Graduation: a time of remembrance and celebration for the graduating class’ achievements and overall contributions to the school. During this upcoming time of ceremonial preparations for the graduating class of 2020, the school’s seniors began to contemplate the importance of gown color differentiation based on GPA. Some believe it is a traditionalistic elitist practice, and others argue that it’s an honor befitting those who’ve earned it.

“Yes [color distinction] does [promote elitism] because it shows, by color, that these students have a higher chance of succeeding as compared to the rest of the blue robed students,” said senior Zach Rothman.

While supporters of Rothman say the same, this belief only reflects part of the senior class. Some see the colors to be a division, but one without any gain behind it besides that of personal recognition for their academic efforts.

“Robe separation does not promote elitism. Anyone from a different background can earn a white or blue robe alike, and the students who are wearing them earned them through hard work and sacrifice,” said senior, Zack Van Blarcom.

Elitism is defined as the belief that individuals who form an elite (those in a select group of people with an intrinsic quality, high intellect, wealth, special skills, or experience) are more likely to be constructive to society as a whole, and therefore deserve influence or authority greater than that of others.

Yet the color differentiation between robes and GPA does nothing to suggest elitism. Those wearing a white robe to signify a GPA of a 4.0+ doesn’t guarantee them anything besides prideful smiles from their teachers and family members. The robe isn’t a VIP ticket into the college of their choice or a golden ticket allowing them to be placed above their peers in blue robes. Likewise, those adorned in blue robes aren’t deemed any less of an important contribution to society, as all graduates have equal opportunity to shape their future to their aspirations after high school.

Robe differentiation benefits no one but those receiving them. Yes, the white robes may single out a group of highly intellectual kids, but this speaks nothing about a “predetermined” future “promised” to them because of it. The white robe serves as an indication and congratulations for something they made happen in the past and nothing more. That is why differentiation of robe colors is an important tradition to uphold, it speaks to the excellence that those students have displayed in personally achieving such high intellectual achievement.

The simple differentiation between those wearing blue gowns compared to those wearing white gowns is not that of an elitist society, but that of simple recognition for the hard work and effort put forth by those deserving to promote their academic scholarship within their year’s class.

“The goal of giving people with 4.0’s white robes, or whatever other reward we may come up with, isn’t to make everyone else feel bad, it’s to make us feel like we’ve accomplished something. I don’t look at my robe and say, ‘You didn’t get this.’ I say, ‘Wow, I did that,’” said senior, Victor Holcberg.

This controversial topic prompts theories similar to those behind the debate regarding participation trophies. When asked about the subject, both Holcberg and Rothaman commented that they found their participation awards to hold very little meaning and value, as everyone receives the award regardless of their attempts at whatever the competition required.

Taking away white gowns from those who have earned a 4.0+ GPA turns something special and deserving into normal and unanimous, almost monotonous. Without a little display of achievement in regards to differentiating those who went above and beyond in school, there would be a stiflement of praise rather than a reward to look forward to and a goal to aim towards, much like the participation trophy, which mirrors this concept through rewarding all who merely show up.

Wearing a different color gown doesn’t promote elitism, no one gains anything from the proud moment of recognition besides the person wearing the robe. Taking away the difference in color representing high GPA accomplishment, suggests that those students must hide this honor-that they need to be humbled and therefore shouldn’t outwardly and openly display their status.

“That moment of pride comes from out-performing the best of the best, from knowing that years of relentless training led them to the performance of a lifetime. The pride comes from doing what they love and being the best at it,” said writer Jonathan Fader, Ph.D in Psychology Today.

Upon the day of graduation, few will think about the color of their robes in comparison to their fellow peers. Those who had worked to accomplish great things on a personal level, regardless of the color they wear, are going to feel pleased and satisfied for achieving all that they have. Graduation is a time to transition from your time spent in high school to the new experiences to come in college and beyond, and a robe color won’t take that away. So regardless of one’s GPA, graduating is accomplishment enough, and a robe color cannot take that away from anyone.