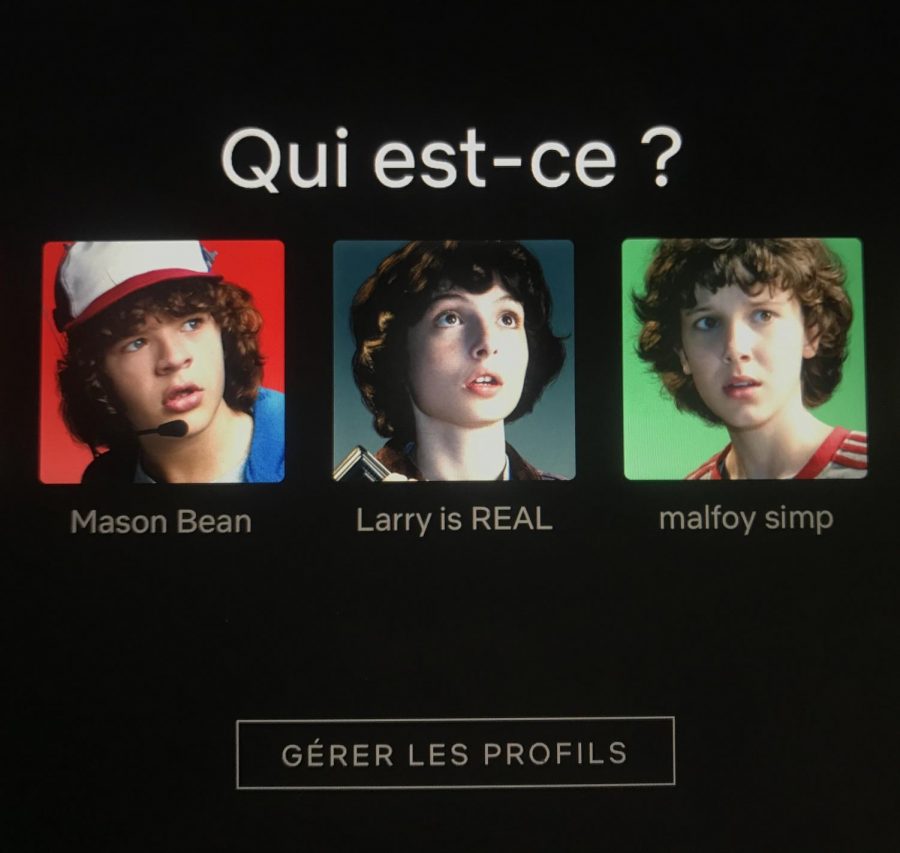 The Netflix language setting is switched to French, where the home screen is asking the user to pick a profile. Once chosen, the user will have a variety of movies, shows and categories to pick from, which are all not excluded from being in the French language as well.

Learning a Language Through Netflix

Language Switch was a Huge Letdown

I didn’t have high expectations when I switched my Netflix profile to French around a month ago, but having the exact same level of comprehension before and after the experiment was certainly not what I’d expected. I thought I would have at least somewhat improved in the language, going into it in my third year of French, but no such luck.

I changed my Netflix settings to French after a friend from my French III class had suggested it. Although, this idea wasn’t completely unfamiliar to me, as I’ve watched movies and tv shows all in French before, in the same effort to improve my skills with the language. But, despite those efforts, I experienced minimal success in expanding my comprehension and speaking abilities.

So, with the minimal success of watching French spoken works, I decided to give this a try, which excluded French from the movies themselves, but added the language to every other aspect of my Netflix home screen.

I’m not even on Netflix that often to begin with, as direct schoolwork takes up most of my time, so going on the provider, even in the name of learning, was a challenge. Henceforth, the lack of time that I had was already an issue going into it. Maybe If I had I done this experiment over a short break, or preferably the summer, I would’ve seen more positive results, but this lack of time proved to be unhelpful.

Although, whenever I did go onto Netflix, I would translate the French words by replacing them with things that I remembered from my previous English account. Unfortunately, those words almost always ended up being phrases I had already been taught and memorized in school.

This made the whole idea of learning new French vocabulary difficult, as every French word or sentence that I interpreted was always a phrase that I already knew.

To teach myself new vocabulary, I would normally use resources like Word Reference, but to do that in this case would be tedious and time consuming. You would have to go on Word Reference every time you see a phrase that’s incomprehensible, which is definitely a lot.

All in all, I would say that switching my Netflix settings to French hasn’t helped me. But, despite my personal experience, I would encourage someone who wants to try new ways to learn French, or any other language, to give it a go.

If you are someone who, A: watches Netflix more often than me, or B: someone who has time to immerse themselves in the language they are learning and work on truly memorizing and understanding it, then this idea might just be for you.

Changing to French on Netflix was a Great Mistake

My sister and I are always joking around with one another, especially when it comes to Netflix. Changing each other’s profile names, pictures and adding random movies to the others’ list is a weekly norm. Although, what I wasn’t expecting, come a month or so ago, was to see my entire profile page in French.

At first I thought I’d just change it, and was already deciding what language I’d switch hers to when I thought of something.

This is my third year of French, so I’d like to think that my comprehension with the language isn’t completely deficient.

My French teacher is always encouraging us to look at outside sources for practice. In class, we’ve even recommended each other French youtubers and movies to watch, which would serve as a sort of incognito way to study.

Henceforth, I decided to trash the whole “switch my Netflix back to English” idea, keeping it as French provisionally. My hopes were to establish a better understanding of the language by indirectly studying, and let me tell you, it works.

My first step was to see if I could translate the categories on Netflix’s home screen. Some sections were more easily interpreted than others. For instance, “Les plus gros succès sur Netflix,” was most likely the “most popular” category, considering the “plus” means more or most and “succès” in english is, well, success.

On the other hand, some categories were more challenging. Despite this section being significantly shorter than most, “Tendances Actuelles” had me stumped. I was vaguely familiar with “actuelles,” knowing it had something to do with “current,” but I couldn’t say the same for “tendances.”

Although, knowing half of the equation helped me to understand the full thing, considering the only Netflix header I recalled to be considerably short in letters and included the word “current” or a synonym of it, was the “Trending Now” category.

This sort of “half-way knowing” technique served to be really helpful. When I wasn’t interpreting the full sentence, I could pick out the words I did know and formulate it into the categories, movie titles and shows I remembered when it was in English.

As the days went on, I became more and more familiar with my home screen, where words were becoming more easily defined. In French class, I started noticing that while formulating sentences, I would remember certain words and their definitions only after recalling that I saw them on Netflix.

Unbeknownst to myself, whenever I was reading a movie title, category or summary on Netflix in French, I was developing a photographic memory of the words, sentences and what they mean.

Now, after a month of this experiment, I can definitely say that it has positive results. Am I suddenly the bee’s knees when it comes to French? No. But do I have a better understanding of French vocabulary and grammar than I did last month? Yes.

I didn’t expect to come out of this as fluent in French, I don’t think that’s reasonable after just a month, especially considering I’m not the biggest Netflix goer, but the positive results are apparent.

In short, I definitely recommend this experiment, it’s fun, relatively easy and especially rewarding when you get to enjoy the feeling of personal achievement.