Students Rise to the Occasion as the November Election Approaches 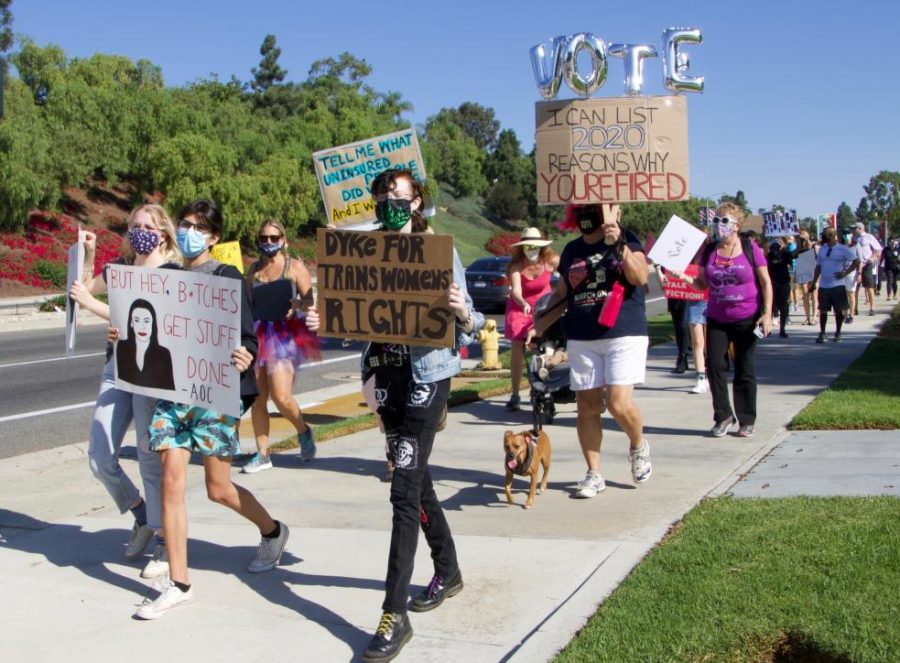 Students and families carry signs at a Women’s March that took place on Saturday, October 18th. It was organized and hosted by the student youth organization CUSD Against Racism to protest Amy Coney Barrett’s nomination as a Supreme Court Justice.

As the November election approaches, students increase their political involvement through the creation of youth organizations and other active groups to promote social justice, both on the local and national level.

High school and college students confront a variety of different issues that divide our nation today. CUSD Against Racism is a student created and led organization to combat racism, specifically that which appears within our school system and in the learning environment. It contains multiple task forces that are catered specifically for each high school within the district. Senior Sarina Iyer and sophomore Sandhya Ganesan are co-leaders of the SJH Against Racism task force.

“I think racism is so prominent on our campus and it’s been hidden for so long. It’s not a topic that we discuss enough at our school, especially considering how many people of color go to our school. Ignorance drives a lot of the racist behavior on our campus, so I think it’s really important to educate on this topic and hold these students who make racist comments accountable,” said Iyer.

Iyer is one of many activist-driven students who decided to promote change on campus by joining certain youth groups, such as CUSD Against Racism, and taking on various leadership roles. These students are uniting together to cultivate a safe environment for teens and young adults to speak out against the injustices present in the community and to give value to these voices that have been previously ignored.

“CUSD Against Racism and SJH Against Racism push the possibility of creating a climate for future stallions that is completely judgement free and everyone is accepted,” said Ganesan.

Youth organizations, including CUSD Against Racism, utilize social media in a beneficial way to promote their goal of activism and social justice. Platforms, like Instagram, allow them to connect with a large expanse of people both currently attending schools within the district or graduates.

“We use our platform to convey our message by releasing surveys, so we can get a better idea of what people find as issues and identify problem points that we can fix. We also use social media to recruit other people and new members. I think it’s really important to recruit new members because one of the things we pride ourselves on is being a forum for student voices, so they can share their experiences with racism and share their ideas on what they wish would’ve been done or what they want to see in their campus,” said Ganesan.

To many of these organizations, voting is an important method to promote change in our society. It is why many of these groups have endorsed political candidates who they believe represent their ideals and beliefs. SJH Against Racism has endorsed Pamela Braunstein to be president of the CUSD District Board. Whether it’s via voting or not, youth voices are extremely important to ensuring a better future for following students.

CUSD Against Racism is working in conjunction with other youth organizations from across the district to host a voter ballot party this Tuesday at 5:30 p.m. where candidates and propositions are reviewed as a group to simplify the voting process. The goal is to increase voter turnout, especially amongst young voters, and encourage students to share their voices.

“I think that being young and being involved is so important because it sets you up for a more involved presence later on the line. I think that you should speak out because you can create a group and work toward your goals. You don’t know what’s going to happen until you speak up, but it’s a risk worth taking because you still have an audience even if you think no one is listening. You are helping the next generation of people, and that’s the most important thing you can do,” said Ganesan.

By speaking out and voting, students are promoting their interests, encouraging social progress, and influencing important elections that will shape the future of our country and ensure a better world for following generations.