Teens Speak Out on What the Future Needs to Hold 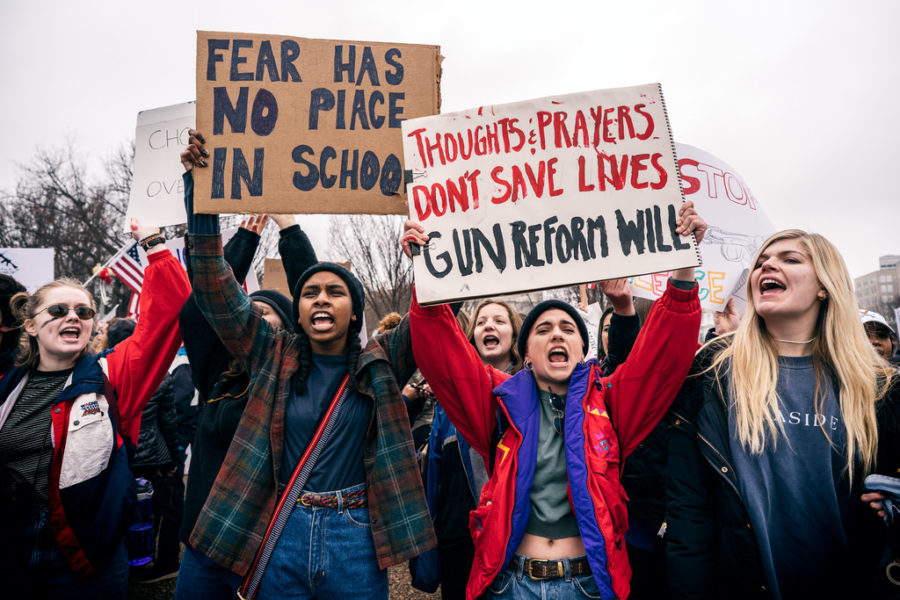 Students protest at a demonstration organized by Teens For Gun Reform in Washington, D.C. following the shooting at Marjory Stoneman Douglas High School in Parkland, Florida.

Globally, the youth’s political efficacy has been rapidly increasing. Whether it’s protesting child marriage in India, fighting the rising cost of higher education in Honduras, or advocating for gun control in the US, the new digital age has rejected the idea that teens should stay quiet.

Teenagers throughout history have gained a reputation for advocating for social change.

Youth played a prominent part in the Civil Rights Movement, as teens challenged racism by desegregating schools and pushing for voter and civil rights legislation.

In 2016, the International Indigenous Youth Council was created when the Standing Rock Indigenous Uprising first started and strived to inspire youth to work with the environment and not in-spite of it.

Protesters, including many teens, stayed on the Standing Rock reservation in resistance to the Dakota Access Pipeline, which was designed to deliver oil across the US and ran through Native American land and clean waterways.

Today’s youth is no different; the message that they are sending is the same: their rights are too important to be put in the hands of the adults who have failed to deliver.

A course of action that was taken by these teenagers is being seen in California, where more than 100,000 teens are now pre-registered and registered to vote. Being registered to vote is one of the first steps to creating the future that the youth will soon inherit.

These new voters, millennials, are officially ahead of baby boomers when it comes to being the largest generation in the U.S. electorate and will soon have their influence felt as voting starts in June and November.

One thing has been made very clear: students have had enough, hence the #enough used throughout March For Our Lives on social media. This is a symbol that students are putting the problems into the hands of officials that are willing to make change.

The actions this generation’s students are taking has landed some of them in the center of the limelight and they are using it as an opportunity to set an example for other teens on the importance their roles hold in this country.

Parkland student, David Hogg, fell victim to hundreds of viral right-wing conspiracy theories calling him a crisis actor or an FBI cover-up. FOX host Laura Ingraham publicly mocked Hogg on Twitter for being rejected by a few colleges. Hogg chose not to personally attack Ingraham, as she did to him, and instead, chose to publicize her advertisers and scare them of mass boycotts, which caused them to rescind their support of the show.

This is one of many cases exemplifying the fact the youth, including Hogg and other Parkland students, are not focused on negativity, or criticism but rather are using said criticism as a way to change the focus back onto the movement.

However the idea that teens are immature and naïve still floods the minds of many adults and has a huge effect on the way a many teens look at themselves. The patronizing attitude adults hold is one of the many aspects that contribute to teens thinking their say is not important and this comes from a lack of tolerance that many adults have.

Often times some conservative parents feel scared for their children in today’s political climate. They see liberal teens’ political views as too transformative and fear that the policies they strive towards will interfere with their constitutional rights.

The idea that your opinions are either right or irrelevant is commonly assumed. Teenagers with beliefs different from their parents are often berated without the consideration that their opinions are rational.

Adults should not be afraid of the youth’s dissimilar beliefs but should be afraid of the teens who chose not to partake in politics at all. Youth activism is new, and the idea that teens are too immature to have a say is old; a primitive idea can not be diminished overnight.

Our generation has not kept quiet about their progressive beliefs and will not be keeping quiet anytime soon. Silence is not what this country needs right now.

It is students like Emma Gonzalez, a survivor of Parkland, and fifth-grader Naomi Wadler, who organized a walkout at her elementary school, as well as organizations like Women’s March Youth and Black Lives Matter, that are setting an example that youth today are not afraid of speaking out because they understand that the one thing that can not be blocked is the voice of the people.