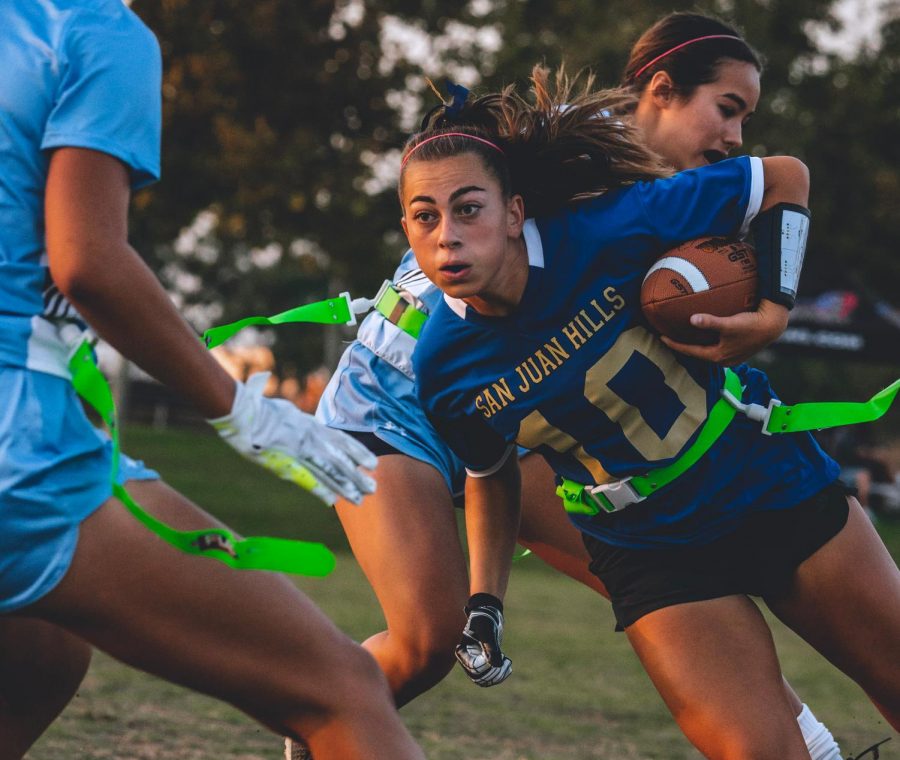 Flag football leagues have been around for years… for boys.

Other than the occasional powder puff game, flag football for girls in high school has been virtually non-existent.

Within the past year, the organization created their first high school girls flag football league in Orange County. The league features nine teams and is the first of its kind in Southern California.

San Juan Hills High School is one of the eight schools participating in the league, competing against teams at various high schools.

The girls soccer season doesn’t start until the winter, so much of the girls team has kept busy by participating in the league.

“The coach’s daughter is on the varsity soccer team with us. So she was like, there’s this new inaugural football league for girls, you guys should join. Then half of us decided that would be fun,” said senior varsity soccer player and flag football participant, Samantha Gugliuzza.

Though the flag football teams are not affiliated with our school’s girls soccer program, about half of the Varsity players are on the team.

San Juan Hills has two teams competing in the league: SJHHS BLUE, consisting of older players and girls from the varsity soccer team, and SJHHS GOLD, composed mostly of freshmen and younger players.

“It’s more of a fun thing to do. It’s not too time consuming,” says Gugliuzza.

Players commit to around three days of flag football per week, with practices on Mondays and some Fridays, and games on Wednesdays.

While “it’s not overly competitive” (Gugliuzza), the BLUE team has earned recognition, achieving success and making it to the league’s playoffs.

Matt Leinart Flag Football extending its program to high school girls is a huge step in the right direction, while creating a fun environment for teams participating.

“It’s fun, it’s easy, and you get to hang out with your teammates playing flag football,” said Gugliuzza.

Check out the team’s instagram for updates and more information.