Main Goal: Get To CIF 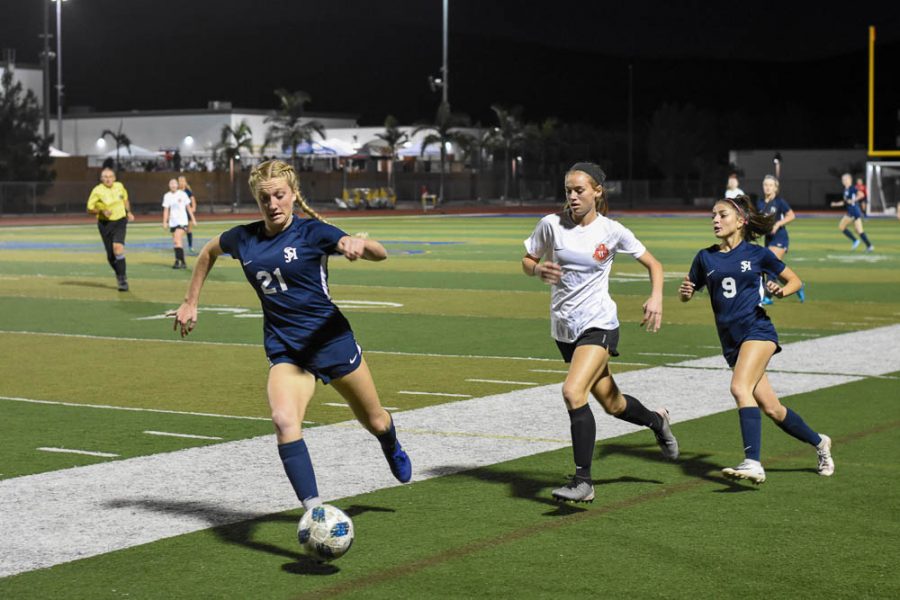 Bella Mincer (12) runs the ball down the field in a non-league match against Woodbridge High School. In a close game, the Stallions won 3-1.

As the winter sports season comes to an end, the girls’ varsity soccer team wrapped up league with wins, losses, and long lasting memories. With eighteen seniors competing in their final season, this year has been an unforgettable time for all of the players.

The team won ten games, lost five games, and tied four games. Last year was the first season varsity played in CIF division one, where they placed third. This season, varsity finished second in their league and accomplished their main goal by making it to CIF for the second year in a row.

CIF is the playoffs for high school sports in California. It is where teams continue playing games against different top teams after league has ended.

The team was able to win the first round of division one of the CIF playoffs. Senior forwards, Mikayla Robertson and Bella Mincer each scored a goal, bringing the final winning score to 2-1. Unfortunately, the team lost round two and did not advance any further.

“It has been a long season with a couple missteps, so the fact that all of our hard work has paid off is encouraging and exciting,” said Mincer.

The varsity team is losing eighteen girls next year, the end and beginning to many players’ soccer careers. Many of these seniors will continue playing soccer in the future, however, for some, it is the end of their time on the field.

“There are eighteen seniors leaving next year, so that is definitely going to hurt us because most of them played this year and there are going to be a bunch of gaps to fill. However, the JV players coming up are really good and I have faith in them,” said junior defender, Macey Leonard.

The team has formed a very strong bond and has watched one another grow not only as players on the field, but as individuals in life. The connection between the players is one of the reasons the team was so successful this season.

“Because there are eighteen seniors on varsity this season, which is almost unheard of at our school, we are all super tight from having been in the program together for four years. We are all extremely comfortable with each other and genuinely enjoy going to practices and games because every game in CIF could be our last,” said Mincer.

The team has grown to form deep relationships and has created many unique traditions over the years. Their pre-game rituals were an example of this.

“Before every game, we get in a huddle, put our arms around each other and we say two things we want to work on and then we give one compliment to the person to our left. We compliment the way they play or anything they do on the field,” said Leonard.

Another reason the team was so successful this season is because of the team’s coach, Farrel Moore. On top of being the head soccer coach, Moore is also the co-athletic director with football coach, Rob Frith.

“I admire how much she cares. She really cares for this team and it really shows through the way we play and she’s always out there giving it her all, coaching us every single second of every single game and I love the way she coaches and explains things to us,” said Leonard.

Many of the players have talked about how the team consistently relies on Moore for advice on their soccer skills, taking the critiques and trying to perfect their individual work.

“I admire her constant efforts to make us better players. She sacrifices so much of her time analyzing our plays, games, and all our individual efforts in the attacks to the goal. At practices she uses her efforts to adjust them to help our success with specific drills that are shaped around certain weaknesses that we showed during games,” said Mincer.

Another activity that really helped the team this season was team dinners. During team dinners, all the players meet somewhere once a week, before a game, to eat dinner, hang out, and grow closer as a team. Players have mentioned that the team dinners made the team more comfortable with one another, which translated to how the team played on the field.

“I’m going to miss the team dinners, having fun at practice, winning games, and getting hyped up for game days with the girls,” said Mincer.

The relationship the team has formed has brought them great accomplishments, including making it to CIF. Although it will be the final season for many of their best players, next year’s varsity team will continue to put in hard work, looking to keep the legacy alive.