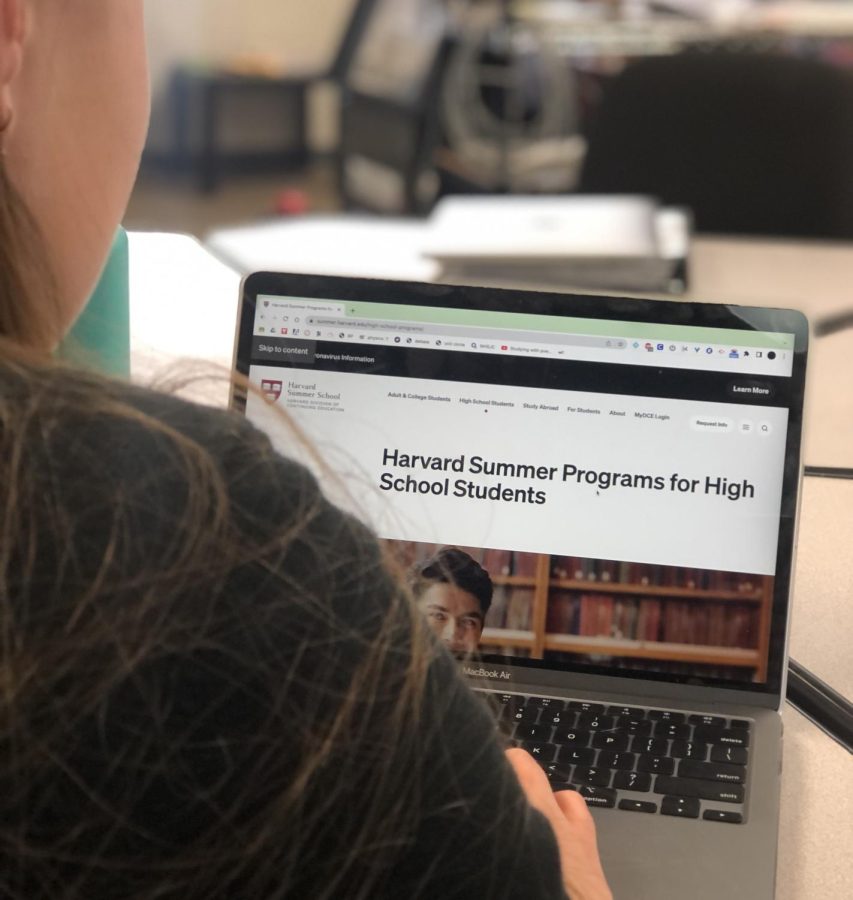 Anna Ho (12) searches for summer programs online. Between generalized programs and those attached to Ivy Leagues, many students have an abundance of opportunities.

As the school year nears its end, many begin to look for ways to continue learning in the summer. Whether it be motivated by desires to keep the brain active, seeking a fun experience, or boosting one’s resume for college, summer programs pose as a great solution to these plans. Deciding which of these programs to choose and apply to, however, is the ultimate challenge, especially when Ivy leagues sponsored programs are part of that selection.

To help narrow in the decision, organizations like College Transitions help plot down the top summer programs for students–specifically high schoolers. The blog notes a multitude of programs within the country, yet out of the top 37 that were mentioned, only around four or five could be deemed as relating to a prestigious school, and merely one from an Ivy League–Princeton.

That is to say then, that there truly is not a dramatic difference in the student satisfaction and challenge level between a generalized summer program and those originating from more prestigious institutions.

“It was a good opportunity and I did learn things from it but I do think that you could get the same experience from a different journalism program. I feel like you don’t necessarily have to find that at a Stanford price,” said junior Kaitlyn Kittredge, who did a six week journalism internship summer program at Stanford.

General observations of organizations have cited the price of “regular” programs to be typically anywhere from $100 to $1,000 whilst those considered to be more prestigious or part of an Ivy League school can reach up to $5,000. Although the field in which you are studying greatly impacts the price, as well as the influence of Financial Aid that some institutions allow, there is no denying the obscure amount that these esteemed organizations demand.

This price is seemingly exorbitant when, after all, the prestigious experiences are ranked similarly amongst general programs… which cost much less.

There is, however, a certain benefit to prestigious summer programs to those students who have goals for study at an Ivy League university. According to AdmissionsSight, a college admissions blog, “While it’s technically possible to get into the Ivies without joining a summer program, we strongly recommend it. It’s a surefire way to have your application stand out from the crowd.”

They also add, ”If you’re able to get accepted to a reputable summer program at an Ivy League school that lines up with your academic goals, you’ll definitely have a higher chance of getting into the school of your choice.”

Generally speaking, attending any summer program, whether it be Ivy League or not, shows an additional educational effort that will stimulate the mind and most definitely increase one’s chances at university.

When it comes to Ivy league programs however, which do not necessarily offer the unique challenge that most people assume, the greater benefits remain singularly to those with plans to attend a similar prestigious school, working as an opportunity for students to show their target college that an Ivy’s distinguished course load is doable. That is, if the cost is as well.