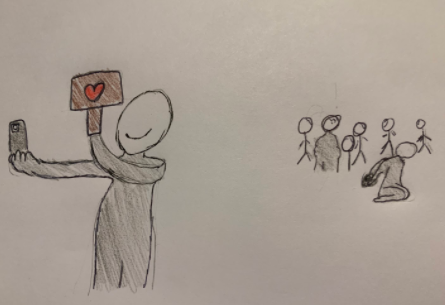 During this year’s presidential election, a projected 66.8% of eligible voters voted, with about 159.8 million ballots being cast. This marks an extremely high voter turnout, the highest since the year 1900. With people’s interest in politics skyrocketing, the amount of performative activism taking place in a number of topics relating to politics skyrocketed as well.

Performative activism is defined on Google as “a pejorative term referring to activism done to increase one’s social capital rather than because of one’s devotion to a cause.”

All acts of performative activism cannot be addressed in general terms, but I think that in current times they are most seen on the internet. That isn’t to say that it can’t occur in real life, but the definition has evolved to somewhat imply that the acts happening are being performed on social media platforms, such as Instagram.

Everything we do on social media is performative. They are things we are choosing to post to show others in order to form their perception of who we are and what we believe in. Maybe the easiness of performative activism is how it came to be so prevalent on social media, as it is much easier to say and post things than to do them.

I think that the main issue with performative activism isn’t people purposefully putting on this front to seem like a better person, but that a lot of people who care about an issue unknowingly do things that constitute as performative activism. I know that, I definitely have, even when I didn’t know that I was. I’m sure a lot of people can relate to the fact of becoming aware of an issue through social media. We see something that people are talking about that we’ve never seen, our empathy starts flowing, and we decide that we want to help as well. Which, honestly, is a good thing.

Performative activism can be helpful on the surface. The internet gives a voice to people who cannot speak their opinions in real life, and allows us access to more people than we would otherwise be able to reach. Acts of performative activism can act as a gateway to spread specific knowledge and awareness of movements that otherwise not as many people would know about it.

The issue with performative activism begins when that effort to make change ends on social media. Educating and sharing your opinion in a broad way can only do so much, as there will always be people against what you’re fighting for and things that stand in the way of progress being made. It is not enough to say you support gender equality, you must stick up for the women in your life and speak up when you see acts of sexism. It is not enough to say you’re not racist, you must be actively anti racist in real life. If we forget that speaking out about something on social media is the least we can do for a movement, there will never be change.