Moving Ahead with Hybrid Model Ignores Voices of Teachers and Students 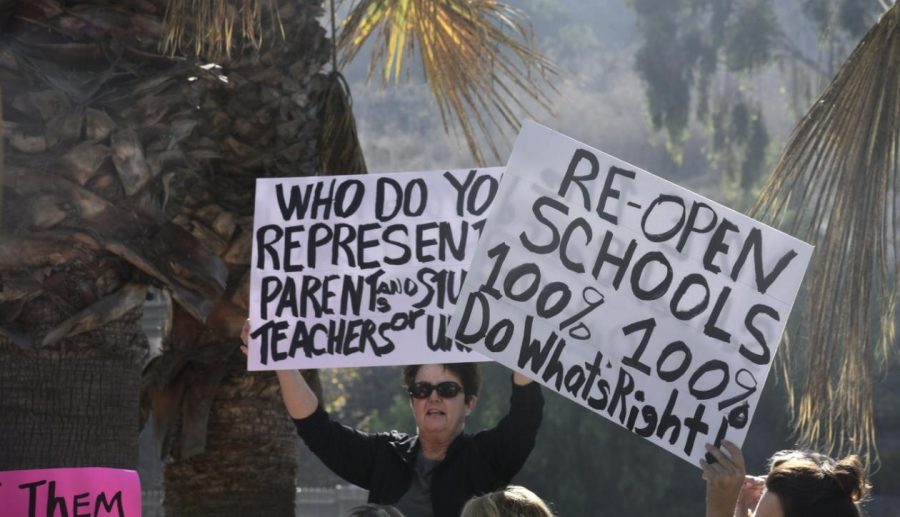 Parents from across CUSD gather in front of the school district office building to protest against agenda item 38, a proposal to reopen schools at the start of the second semester. The agenda item was pulled later that same day.

The Express Editorial Board

Students across the district will have the option to experience hybrid learning starting October 13th, which is not only a bad idea, but a dangerous one. The board rushed the decision to implement hybrid learning and did not properly listen to the teachers and students whom their decision impacts.

While the reopening of the school has been constantly evolving, the most recent events include a proposal to go back to campus on October 13 (as previously voted on by the board) and another proposing to return following the first semester. The form was up for Board discussion as agenda item 38 at a scheduled meeting, however it was abruptly pulled from the agenda. This should not have happened, as students, staff and parents deserved a discussion.

Many are for the reopening of schools on October 13, even though they are not aware of the extensive list of disadvantages that come with it.

It would jeopardize the health of students and teachers alike, and inconvenience them significantly. We already have an online format that has been working well. Although it may not be ideal, it is much better than the current hybrid plan of which many students, parents, and teachers dislike.

This is largely in part of the fact that hybrid learning significantly decreases live learning instruction time. The switch will cause students to only see teachers twice a week, and will be losing time while actually at school. There won’t be tutorials for extra help, as that will be taken away for a longer passing period.

A shift halfway into the semester is dangerous to the tempo of our learning environment. Just as students have gotten used to this new normal, the district wants to rush students back into the halls. And if the worst comes and school shuts down again, that’s another problematic change.

While reasons differ from family to family, many of those in favor of hybrid learning stress the importance of the social opportunities it brings. However, many do not understand how social interaction at school will truly look when we go back.

It’s not going to be the same.

The social aspect of school will be drastically different from what it was last spring. There will be no table groups in classrooms. Everyone will be six feet apart, even during passing periods and lunch. School will have the same amount of “socialization” as it has now, if not less, due to the ability to collaborate in breakout rooms online.

With all these negative aspects of going back, the Board made a rushed and uninformed decision that will affect us all.

While making this decision, the Board never consulted those affected most by this: the teachers and students. During the last board meeting, many teachers and parents voiced their concerns about the hybrid model, and there was little response from the board.

To leave out the teachers who will also have to go to school is absolutely erroneous, and unfair to those who would have to put themselves and their families at risk.

While the Board did consult some students, it was not a holistic picture of those who are going back. According to an email sent out to parents, “two of us met with ASB leaders from our high schools.” Many ASB leaders are incentivized to return to school in order to arrange activities similar to a normal school year. However, the views of ASB students may not represent those of the greater student body, leading one to think CUSD leaders are not making decisions based off of the consensus of their constituents.

In addition, the district conducted a survey over the summer regarding parents’ and students’ opinions about the return to school. The survey resulted in 80% of students wishing to go back to school in-person in the fall. This outdated poll does not reflect the current opinions of students, as this hybrid schedule is not what most had envisioned regarding the idea of returning. Additionally, many students continue to switch to an online only schedule, which serves as another case of the Board misinforming the public about hybrid learning.

Going back to school may seem like a positive step forward, however the costs far outweigh the benefits. Jeopardizing the health and safety of students, teachers, and their families across the district is not worth a few socially distant classes each week. Even though families are eager to return to campus, the way in which the district determined the hybrid schedule was biased, and unfair in gathering the opinion of the majority of people who are planning to return to school in the coming weeks.