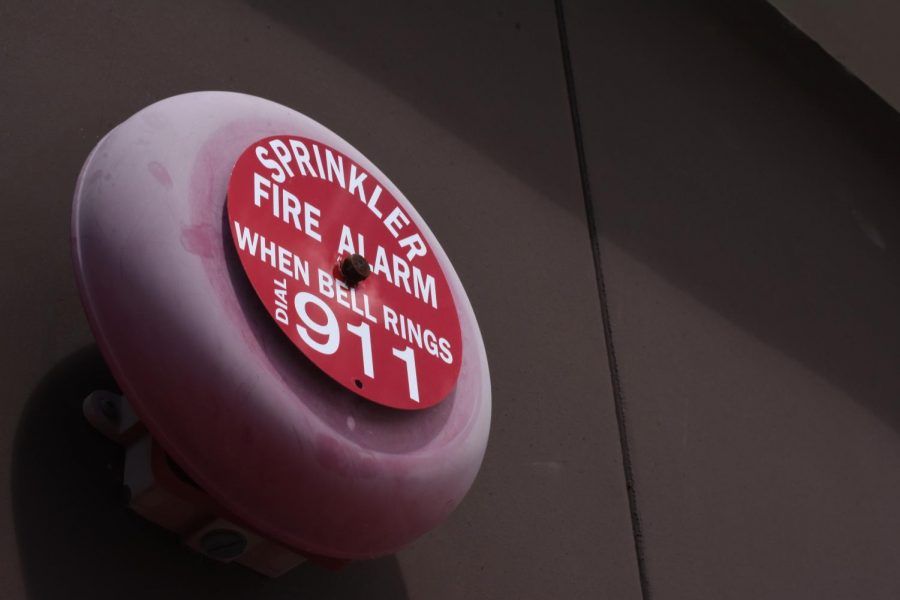 In accordance with state and federal law, the district has installed fire alarms all across the school campus. This fire alarm, the one located at the track, is notorious for going off during practices, games, and track meets.

It’s third period. The teacher is only halfway through her powerpoint, and you’re wishing that you were at home sleeping. Suddenly, the loud, shrieking sound of the fire alarm goes off. It scares you for a moment, but then you get over it. Everyone in your class looks around as a way to acknowledge the noise, but no one actually does anything. Eventually your teacher, who looks irked that the fire alarm is taking away from her lesson, chimes in and says, “It’s probably just a false alarm, let’s get back to the lesson.”

This is a situation that we will all inevitably experience during the school year.

As a school, we have lost our respect for the fire alarm. No longer is the fire alarm seen as a device that protects us from mortal danger, instead it is seen as agitating and doing nothing, but wasting our time, while destroying our eardrums in the process.

For those of us who have forgotten the purpose of fire alarms, let me remind you. The fire alarm system in a school is meant to alert students and staff of a potential fire in any of the buildings on campus grounds by using a loud sound to signal an immediate evacuation from the buildings.

In our school however, whenever a fire alarm goes off, no one is thinking ‘where is the nearest emergency exit’ or ‘we should all evacuate to the football field to ensure that we are all safe from a potential fire’.

In our grim reality, the fire alarm at best gives students a sense of shared indifference to the noise, or at worst fills students with contempt, and disdain for the safety precaution that is designed to save their lives. For students, the fire alarm sound doesn’t mean fire, it means false alarm.

This way of thinking, while dangerous, isn’t at all surprising.

Per the guidelines of the Capistrano Unified School District, all CUSD elementary schools must hold fire drills monthly, and for CUSD middle and high schools, they must hold fire drills once per semester. With the addition of false alarms that usually occur once or twice in a school year, it’s easy to see why students are simply tired of hearing the fire alarm.

By the time a K-12 student graduates high school, they would have heard the fire alarm go off at least 75 times, and this is probably all without ever having to deal with an actual fire.

Obviously I’m not advocating that we do away with fire safety drills; however, we should be looking into what the years of fire drills and preparing students for disasters is actually resulting in: apathy among students.

After at least 75 times hearing the fire alarm, students have only ever experienced two situations. When a fire alarm goes off and the teacher says that they weren’t told that there was going to be a fire drill, everyone naturally thinks the same thing. It’s just another false alarm, who cares.

“[Whenever the fire alarm goes off] I just think that it’s a drill or a mistake at first and I think most people think the same thing as me,” said junior Zoie Bonnette.

There are two options we could do moving forward in regards to our lack of trust in the fire alarm.

If we wish to prioritize the lives of students and staff over potentially wasted instructional minutes, then we should treat every fire alarm as if it were real. This means that every time the fire alarm is sounded, the entire school would do an emergency fire drill.

If you think this would result in kids deliberately pulling fire alarms in order to get out of taking tests, then I’ll remind you that falsely triggering a fire alarm is a felony and can result in culpable negligence.

Or we could simply continue with the way things are by ignoring the fire alarm when it goes off and hope that there will never be a real fire.

Perhaps sticking with our current attitude of acting as if every fire alarm is a false alarm is adequate enough. Perhaps there will never be a life-threatening fire on campus. Perhaps in the case there was a fire, everyone could still survive even if we dismissed the fire alarm

If I were to  admit I was wrong, let’s just stick with the way things are. If it’s not hurting anyone, I suppose we should all continue to ignore the fire alarm every time it goes off. I mean what’s the worst that could happen?

For a quick moment, go back to third period. The teacher is teaching, you’re tired, and the fire alarm goes off. No big deal, it’s probably just a false alarm. You take a glance at your teacher, and she’s livid.

This time however, think about what would happen if you looked out into the hall and saw the hallway overflowing with ashy smoke from a fire. By overlooking the fire alarm’s warnings, we put everyone’s life in grave danger all just so we wouldn’t waste class time.

In reality this scenario will probably never happen, but then again, would it really hurt to play it safe?