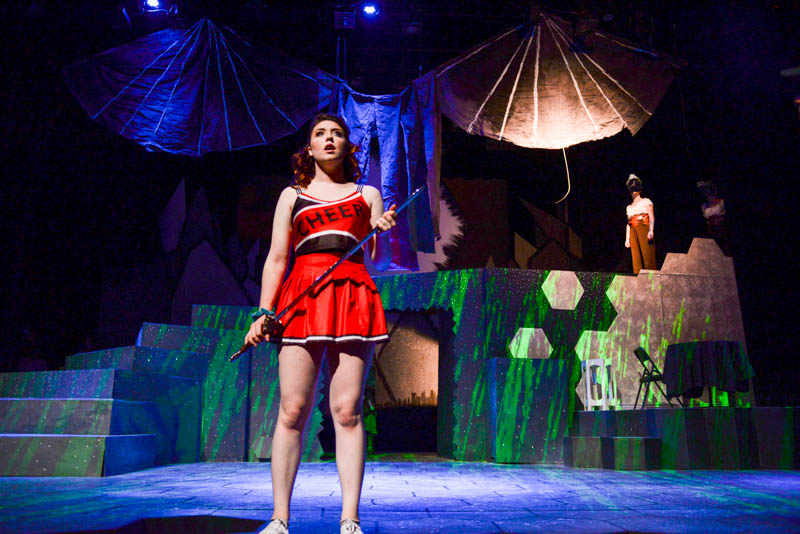 Holland Rollap (12) gazes up as she performs the lead in this years drama, She Kills Monsters. Her character, Agnes, is the sister to Tilly, played by Olivia Roselli (11). Tilly and her girlfriend Lillith, played by Holiday Jones (10), share a kiss onstage, one of the first cases of LGBTQ+ representation in the Stallion Theater Company’s history. The show discusses themes like personal journeys, discoverence, and acceptance towards others and whom they love.

Stallion Theater Company’s fall production She Kills Monsters involves a scene that represents a  huge step for representation for the LGBTQ+ community. Two of the female leads are in a relationship and even kiss during the play, something that is largely ignored by mainstream media.

As the show continues, Tilly is discovering her identity, and the takes audience on that journey with her. Towards the end, Lilith ends up dying in a battle, with her and Tilly sharing an emotional moment together.

This moment shared by the two is unique to the traditional romances the theater company portrays, and makes great strides to normalize LGBTQ+ youth,  a community often ignored by media and even more so by schools.

“I really loved the play, and it was really brave of the school’s theater to portray an LGBTQ+ relationship like that. I mean, they knew that there would likely be people in the audience who don’t support it, but they stood true to what they wanted to do and showed the reality of relationship type that isn’t often portrayed in the media or entertainment in general,” said junior Eavin Leitner-Woolf.

“I was surprised at first, because it is mostly boy- girl relationships shown in the media. But I liked that there was representation of a LGBTQ+ couple in the play, and their feelings when they first face their sexual identities. I hope to see more representation of minorities in general in the future,” said junior Jieun Choi.

Often times media subjects these characters to a trope known as “queerbaiting“ which involves the characters being hinted as LGBTQ+ to attract that audience, but not actually depicting them that way to avoid alienating other audiences.

However, She Kills Monsters steers clear of this by truly representing this relationship, and not treating it as more of a character’s experimentation.

“Overall I personally loved that scene, it was so powerful. It was Olivia’s and Holiday’s true acting moments, like when Lily’s character dies and you can see Tilly’s heart shatter in her chest,” said sophomore Emily Smith.

She Kills Monsters successfully represents this relationship perfectly, by steering away from treating it like a phase, or other LGBTQ+ stereotypes that are ever present in media. The show is a huge step for the Stallion Theater Company, and SJHHS as a whole.