Costumes vs. Cosplay- Know The Difference! 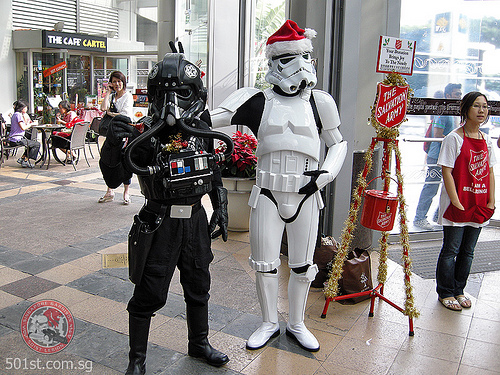 The 501st Legion is a charity group made up of Star Wars fans who focus on making accurate and realistic costumes of characters. They attend several charity events, and have partnered with the Make-A-Wish Foundation.

Cosplay. The parents usually hate it, some people love it, but what is it? And why is it different from wearing a costume?

Cosplay is defined as “the practice of dressing up as a character from a movie, book, or video game”. For example, if you’ve heard of the charity group called the 501st Legion, this may seem familiar. This is a charity group made up of Star Wars fans where everyone wears a costume, attempting to make it as realistic and accurate as possible. These people attend charity events, such as the CHOC walk, or partner with the Make-A-Wish Foundation.

One time, I was participating in the Juvenile Diabetes Research Foundation (JDRF) walk, to raise money for research into a cure for Type 1 Diabetes, because my little brother has it; this 501st group attended the event. There were people dressed as Luke Skywalker, Lando Calrissian, some Death Troopers from Rogue One, some pilots, and a couple Jedi, to name a few. Not gonna lie, it was pretty cool. Ironically, the person dressed as Luke looked more like Anakin, but hey, what can you do?

A costume is simply dressing up as a character from a book, movie, game, or anything, really. A costume can be cheap and store-bought, or ambitiously made. We’ve all been there- dressing up as a ninja or superhero, and having to wear the fake muscle pads in the costume. Super uncomfortable, usually unbalanced, and, depending on the weather, can make it feel like you’re in the Sahara Desert, or a Ladera Ranch summer. (In Ladera, summer weather is usually 102+ degrees.)

Usually, as in the case of the 501st Legion, the costumes are designed to be as accurate and realistic as possible. Usually, when not in costume, the armor, uniform, or robes are kept in a rolling trunk, with the person’s name, and what part of the group they are in. For example, members in Los Angeles are referred to as the “LA Garrison” There’s also the Dune Sea Garrison, referring to Arizona, and the Cloud City Garrison, referring to Oregon, and, well, you get the idea. It’s a really interesting system, that’s really well-designed.

With a costume, it can often be thrown in a bag, the washing machine, or just stuffed into a locker. It’s easier to carry around, but here’s the thing.

Once upon a time, I had a cheap, store-bought costume of a character from Star Wars, namely Captain Rex. The chestplate was a two-piece hunk of painted plastic, attached with Velcro. There were no boots, and the legs were basically pajama material, while the “helmet” was just a mask with a sunglass lens as the visor.

All in all, it wasn’t very good. The chest plate broke when I put it on, so I had to go as Spider-Man. In the show, Star Wars: The Clone Wars, Captain Rex wields two small black DC-17 pistols. In the case of the store-bought costumes, he wields a bright white, blue, and orange DC-15A blaster rifle.

The pistols are rather small, and are only used by high-ranking characters. The rifle is a larger gun, used by almost everyone. Plus, in all the episodes, movies, and novels, no gun is white, orange, and blue. The point of the weapons are usually efficiency or beauty. Almost all the time, they are all-black, with the exception of a couple alien weapons, and the First Order stormtrooper guns.

Usually, you see a trooper with those pistols, and think “oh. He’s a Commander.” or “Oh, he has a rifle and pistols. He must be an ARC Trooper.” (Note: ARC troopers are highly elite and well-trained, usually outranking even the commanders.) The pistols are only used by high-ranking officers. There is little to no way to mess that up. Rex has NEVER used the rifle. He is iconic for his pistols.

Most other Commanders have used the DC-15A, the “rifle” one, or an actual rifle-type rifle, with a shoulder rest and a long barrel. (The DC-15A is a rifle in name only. It’s a fairly small gun, usually wielded two-handed, although the stronger troopers usually can wield it with one hand. The rifle, like the actual rifle, is usually a single-shot sniper, or an automatic rifle, depending on who you talk to. Both versions are technically correct.)

In the movies, you can see that the trooper’s armor is shiny, save for a couple clone battalions designed to serve in camouflage armor, or just covered in battle scars. The 501st Legion replicates this effect admirably. The store-bought costumes are dull, get dirty easily, and have a strange habit of acquiring dirt and dust really quickly. I swear, I only wore the costume once, on Halloween, and it attracted dirt and smudge like someone wore it every day.

With cosplay, you can, if you think about it right, feel the character. As in, you feel immersed in the moment. It’s realistic, and you can, at the very least, pretend in your mind that you’re the character. Some people use wigs, skin toner, even applying temporary tattoos if necessary. Some characters are iconic for their tattoos. Obviously, actually acting like the character is a little too much.

If we had someone running around, acting like Darth Nihilus, we’d have a bit of a problem, seeing as Darth Nihilus was a character famous for his ability to drain all the life from a planet at will. He absorbed so much of this energy, he had to bind his life force to the mask and robes he wore. He’s basically a vampire-ghost that sucks the life out of whole planets. If someone was acting like him, trying to electrocute innocent people, and stealing their life force, that would be what I call a “problem.”

With a store-bought costume, it’s impossible to even think like that character. No clone trooper wears a wrap-around plastic mask.

All in all, each kind has their flaws and strengths. Costumes are cheap, easy to store, and are (generally) kid friendly. Cosplay is realistic, accurate, and immersive. In fact, I’d go on to say that cosplay is the costume of grown-ups and teenagers.

However, costumes are non-realistic, not very durable, and generally inferior. On the other hand, cosplay can be expensive, difficult to store, and takes a lot of effort to make.