People Start Cutting, They Can Stop 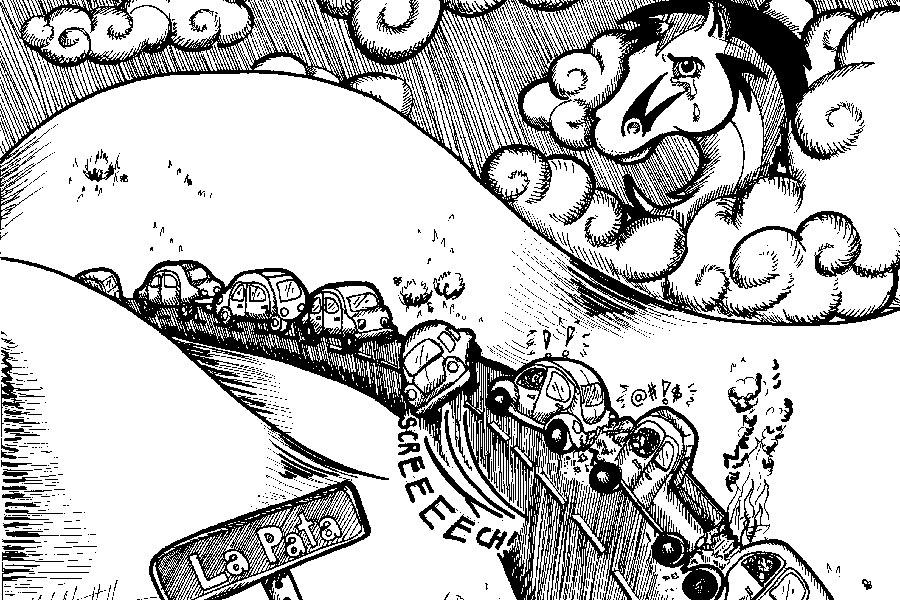 Every driver on La Pata is a hair away from the bumper in front of them, in an attempt to thwart potential cutters. This is concerning.

If one was to insert themselves in front of someone in a line for a ride at a theme park, or the ticket booth at a movie theater, they would almost certainly be scolded.

People would generally refrain from cutting in line in other circumstances, but that refrainment seems to change when they are inside of a car.  The chaos that would ensue if a two thousand pound car were to cut someone in line at Disneyland would be palpable! Yet every day patient Stallions experience the dilemma that is cutters.

When one cuts in the line they are prioritizing themselves over every other person in the line.

“People who cut in line are inconsiderate,” said Meggan Spellman (12).

Every time a car injects itself into the line, a crescendo of brake lights will coarse all the way down La Pata; it’s a domino effect. The line is traveling at a snails pace because of this constant stopping.  When someone decides to cut they aren’t just affecting one person, but every person waiting patiently in the line.

The disregard for the time of others is what makes many student drivers very upset.

“When someone cuts in line, I feel frustrated,” said Nathan Nhek(12).

Many cutters justify cutting with the excuse that is that there is simply too much traffic. They provide an insistence that there is just no way to get to school earlier and avoid traffic, oh the humanity!

Except there is; leave earlier.

One can simply re-adjust their sleep schedule rather than putting themselves above every person waiting in line.

Students drivers are certainly a part of the problem, but it must be noted that a large portion of students are driven to school by their parents.

When Eric Paulsen, assistant principal of guidance, worked in the discipline office, he stood up on the corner several times to watch who was cutting or making illegal right turns from the left hand lane.

“In almost every-single case it was parents” said Paulsen.

When parents drive recklessly and selfishly, they project that way of driving to their kids who are soon to be drivers themselves.

Every person in the line needs to be at school on time.  The rule that many have been taught since they were children, “treat others the way you want to be treated,” is very applicable to the subject at hand.

A scene of a thousand cars in a representative demolition derby up the hill to school is a terrifying one.

Everyone is trying to get to school on time, cutting in line prevents many from doing just that.

Be gracious to other drivers and your fellow Stallions.