Senior Awards Reveals the Stallion of the Year and More 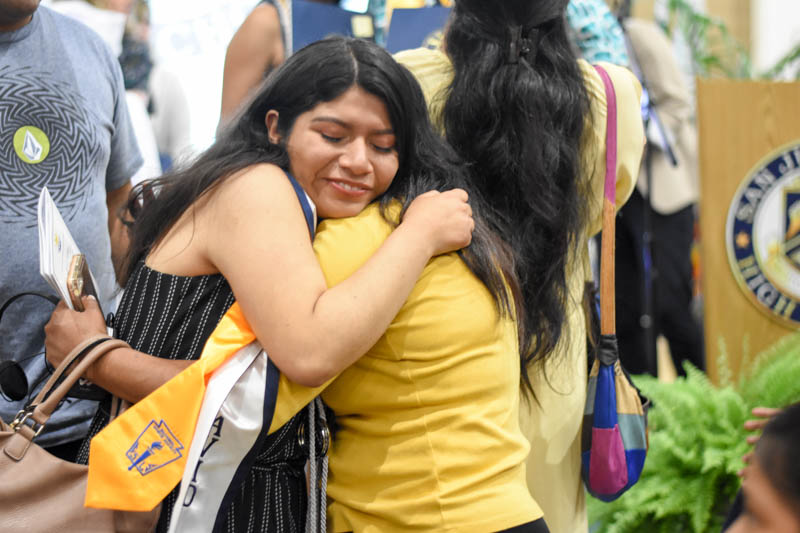 Celia Aguilar, the Stallion of the Year, hugs a friend with tears of joy. She was selected among five other Stallions and has a picture hanging in the front office to honor her achievements.

Stallion of the Year: Celia Aguilar. Anyone who meets Celia Aguilar immediately recognizes her kind heart, zealous work ethic and outgoing personality. She truly understands the meaning of hard work, as she grew up in an environment that made it difficult to achieve high academic success. She will graduate as a National Honors Society student with six Advanced Placement classes, earning a 3.99 GPA as a result from her perseverance and diligent work habits. However, her dedication and success do not stop there. With a sincere commitment to giving back, Celia spends countless hours serving her school and community. As an AVID officer, she has helped lead the Back to School Night fundraiser, Shadow Day, Incoming Ninth Grade Interview Night, Marco Forester’s Santa’s Visit and many more events. Through mentoring younger AVID students, Celia has become a true, responsible leader, learning about herself and the effect she can have on her community.  Celia has invested her time in the Hispanic Career Club, Latinos Unidos, Great Opportunities, and Bridges, permitting her to express her cultural background and stay close to her roots. Being a part of ASB has given her amazing experiences and has allowed her to grow in a way she never even realized was possible. In her position as Commissioner of Campus, Service, Student, Staff, her communication skills have developed immensely, going out of her comfort zone in order to get other Latinos involved with school spirit and participation. If you know Celia, you know she is loud and proud. Celia plans to major in Human Biology and minor in Spanish at the University of California, Riverside.  She aspires to become an ophthalmologist, and is excited to commence a new chapter in her life where she will continue to give back to her community, while working hard to reach her goals.

Scholar of Scholars: Brandon Tong. Brandon Tong has balanced a multitude of extracurricular activities with a rigorous academic schedule since freshman year. He has demonstrated his commitment to excellence with over a 4.0 GPA and three achievement awards in math, social science, and foreign language. He also earned the AP Scholar with Distinction and the National Hispanic Recognition award. Along with his academics, Brandon regularly gives back to his community. He has held leadership roles in multiple volunteer organizations such as National Honor Society, Interact Club, and Link Crew. Brandon is passionate about helping others succeed and willingly dedicates his time assisting fellow students in math, science and Spanish.  He is also an assistant instructor and black belt in Taekwondo. To round out his time, he has played as a violinist in the school orchestra for four years and played in the pit for “Drowsy Chaperone” and “Les Misérables”. Brandon has also participated in the Language Immersion Program since elementary school. La experiencia de vivir rodeado por tres culturas, la china por parte de su padre, la hispana por parte de su madre y la norteamericana por parte de su país le ha enseñado a valorar diferentes perspectivas, orígenes y valores en definitiva considerar una forma diferente de ver la vida. Brandon plans to attend Yale University with a double major in both chemical Engineering and Spanish and put his education to good use working in a Spanish-speaking country. Brandon truly embodies the spirit of a Stallion riding for the BRAND.