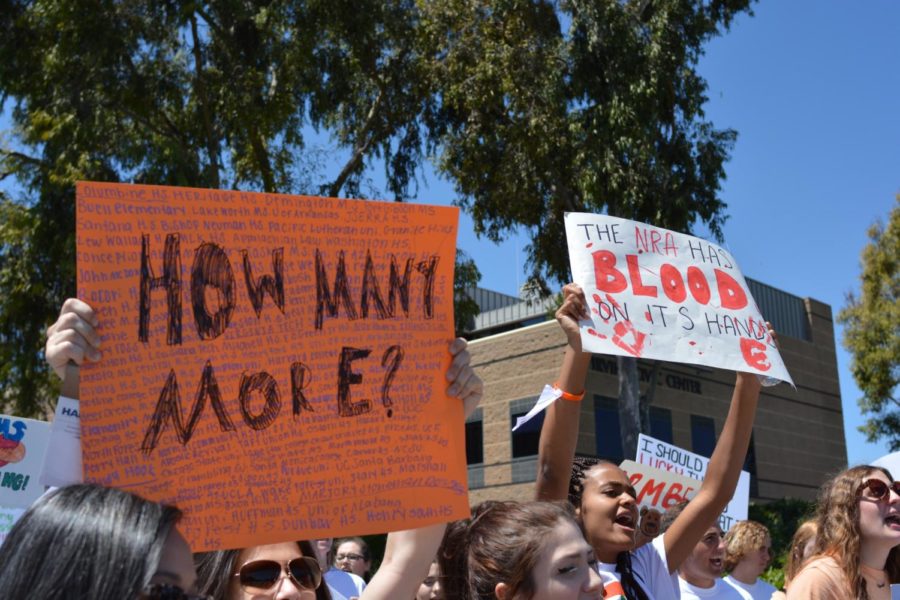 Students gather in Irvine California to participate in the national student walkout. Those involved in the rally promoted reform to gun legislation in the United States.

On Friday April 20, thousands of students across the nation walked out of their schools to protest gun violence in America. The rallies that took place in all 50 states were conducted on the 19th anniversary of the Columbine High School shooting in Colorado where 15 individuals were killed.

This was the third nationally organized protest this year in response to the shooting in Parkland, Florida at Marjory Douglas Stoneman High School, where 17 people died.

16 year old Lane Murdock from Connecticut was the founder of the walkout, and Parkland student survivors promoted it on a national platform through social media.

The group is dedicated to encouraging students to become politically active and stand up for common goals.

“We are calling for Congress to institute universal, comprehensive background checks, increase budget allocation for school safety, fund the Center for Disease Control’s research into gun violence, and implement a ban on the sale of assault weapons and high-capacity magazines in order to address the issue of gun violence in this America,” said Junior Bachelder, one of the rally’s organizers.

The rally on Friday commenced at 11:00 a.m. and went until around 1:00. Students from a variety of high schools within the Orange County area gathered at Bill Barber Park in Irvine. Those that joined were adorned in SOC4Change t-shirts and the color orange, which has been made the color of the anti-gun violence movement after 15-year-old Hadiya Pendleton was shot and killed on January 29 in 2013.

Marchers also carried signs with clever yet powerful messages conveying their feelings towards the dangers of gun violence and the National Rifle Association.

Those that gathered at the park listened to many gun reform activists, ranging from people who have been involved for decades to students. The speakers included Charlie Blek from the Brady Campaign, Bethany Webb whose sister and mother were victims of the Seal Beach Salon shooting, Mary Navarro who is running for the OC Board of Education, and Winter BreeAnne, a Women’s March Youth organizer.

After the speakers were finished, around 100 students marched through Irvine for about two miles and at one point past Irvine City Hall.

In preparation for the rally, student organizers had an abundance of hoops to jump through before April 20 came.

“We had to put a huge amount of planning into this event in a very short amount of time — securing a location, getting permits, equipment, and guest speakers, and of course making sure that as many people as possible in Orange County knew about it and would show up,” said Bachelder.

Hannah Hughitt, another march organizer, explains that her involvement in the movement is extremely personal to her.

“This rally as well as this organization is really important to me because I am really passionate about gun reform in our country and personally I’m fighting to end gun violence of every kind, from domestic abuse and shootings in low-income communities to more publicized mass shootings. This rally and organization has really empowered me and made me feel proud to be apart of my generation because were the ones that are going to make change happen,” said Hughitt.

Of the students that attended, not all were from San Juan Hills High School. Kendall Bottjer, a junior at St. Margaret’s also took part in the rally with other St. Margaret’s students after learning about it through Instagram. For Bottjer, the march and its goals are vital to elicit change in modern society.

“Simple common sense is being exchanged for adherence to an amendment written to regulate 18th century weapons; even if it’s not completely banning firearms, something needs to be done to stop unnecessary killing,” said Bottjer.

Bachelder also expressed strong feelings towards those that continue to actively oppose gun reform within America.

“To anyone who feels that there is no problem with gun legislation in our country, I guess I would say I hope you think about whether or not you’d be able to stand by that opinion if your best friend, family member, or future child’s life was taken by gun violence — because that’s what really sparked me to take action at this point: I know everyday it could be me or my loved one next,” said Bachelder.