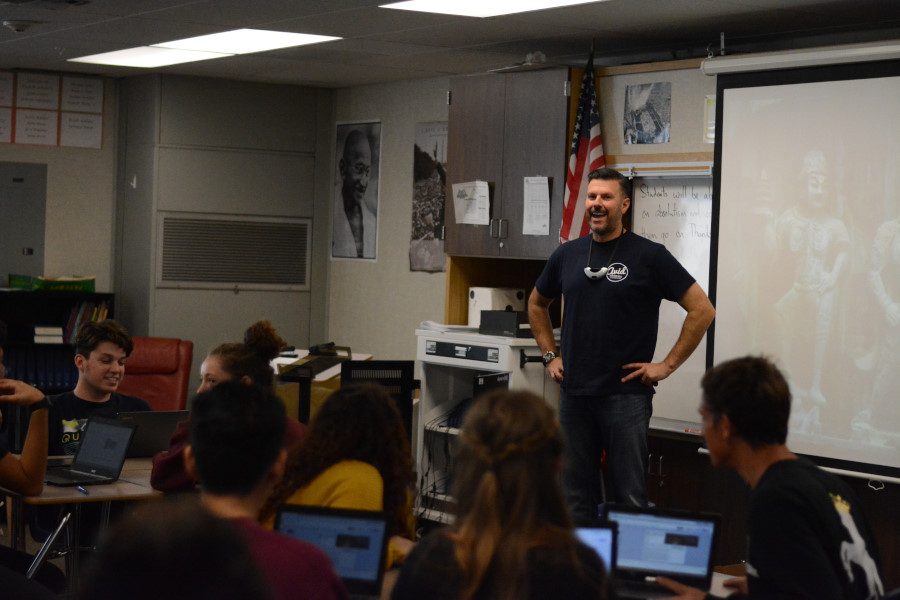 Out of all high schools in CUSD, SJHHS has the highest participation rate in advanced placement classes, with 1,909 AP seats filled by 744 students, according to recent data released to The Express.

According to Eric Paulsen, Assistant Principal of Guidance, one of the main reasons SJHHS has such a high level of participation is because, unlike other schools across the nation, SJHHS AP teachers encourage students to stay in the classes and push themselves, rather than level down.

Mr. Baker, and others who teach AP classes, have consistently encouraged the removal of any barriers to participation, one reason for a high participation rate here.

“If a student comes to a teacher saying he or she is struggling and is not sure what his or her next step should be, San Juan Hills teachers will offer their assistance rather than telling the student to consider dropping the class,” said Paulsen.

“Most would think that encouraging students to challenge themselves is the obvious choice, and what every school would do, but is is actually the opposite. Many schools care less about participation and more about their pass rate,” he said.

Even though SJHHS wants students to stay in their AP classes and challenge themselves, the school’s pass rate is not substantially lower than other schools in the district, and is, in fact, higher than two of them. The overall pass rate at SJHHS is 79 percent, 17 percent higher than the state’s average pass rate of 62 percent.

Paulsen said that the school wants students to try their best and push themselves to stay in more taxing classes, but the school also cares about their sanity and does not want a student to take too many classes where they can not handle it.

This year AP Computer Science was added to the line-up of 22 AP classes offered here. Next year AP Human Geography could be added, but details about who it would be open to are as yet undecided.