Student on Campus, National Champion in the Fence 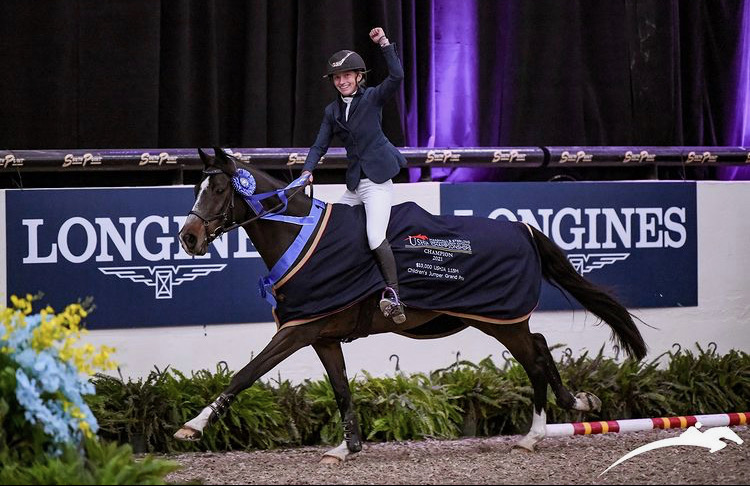 Rowan Smark (11), and her horse Thomas are featured riding at the USEF/USHJA National Championships. The two returned home as winners of the National Children's Jumper Grand Prix.

Wake up. School. 6 hours at the stables. Sleep. Repeat.

This is the busy schedule that has consumed the life of junior Rowan Smark for the past three years now. The dedication and hard work however, has definitely paid off—Smark and her horse being named the Children’s Jumper National Champion for the United States Hunter Jumper’s Association.

Her passion for jumpers was not an overnight undertaking though, beginning when she was 8 years old, where she was enrolled in a horse riding camp for the summer. It wasn’t until 13, just three years ago, that she would start training.

“I started at a lesson barn and I would just ride lesson ponies and there was this opportunity to half lease—it’s where I share a pony with another person—and we were like okay, might as well. I mean this is my sport now,” said Smark.

After that one year lease ended, Smark’s trainer lined her up with a different horse, classified in the hunter discipline. This categorization makes up two of the many different sports in equestrian: hunter and jumper.

“There’s different disciplines in equestrian, there’s Hunters and Jumper. Hunters is based on how pretty your horse is, and I didn’t want to do that because it was subjective.”

Despite Smark wanting to pursue riding in jumpers—scored on how fast you go—she took her chances with the hunter horse, Thomas. This 11 year old horse and Smark made a great match, though regulations surrounding the pandemic made it difficult to work.

“The whole situation that happened with COVID-19 at that barn wasn’t working where I wasn’t allowed to see him very often.”

The solution was that Rowan buy the horse, which would ensure that Thomas could move barns and be seen more often.

That’s exactly what she did.

From there Smark started a two year streak of training with Thomas: 6/7 days at the stable, riding 5 days a week, jumping once a week, 6 hours a day. It also involved competitions both individual and team based, simultaneously learning the character of her new companion while at it.

“Now that I’m able to take care of him and do all these things with him I can really understand him more and it honestly helps with the riding too because I know where his body is, and how he’s feeling.”

Within this recurring, heavily immersed arrangement, Smark and Thomas were led to the team championships. This meant that Smark would work alongside other riders for points, however with jumpers, ranking is always exclusive.

“Being on like a football team or a soccer team you’re all playing for one goal, for one win, but when you’re an individual, everybody within your club or team is playing for themselves.”

Once finalizing team competitions, Smark had very little expectation of even competing in nationals. It had always been a goal, yet she knew the reality of the limited pick of riders chosen, as well as the great amount of points she would need.

To her surprise, an email provided itself with her name under the qualification for nationals, Smark and her horse unknowingly on the path to their eventual victory.

Smark and Thomas completed their event for the United States Hunter Jumper’s association in the 1.1 meter jumpers.

Their competition was no match.

“When we went we didn’t expect anything from it and it worked out—somehow we won,” she said.

Now proclaimed as Children’s Jumper National Champion, Smark has made her and her horse’s name known across the United States. The work though, does not stop there. Following this accomplishment, Smark will continue training with Thomas, furthering her plans of pursuing a career as a professional rider.

“If you are willing to go for it and fight for it, then you can get far.”