Local Group Bakes up a Storm for Charity 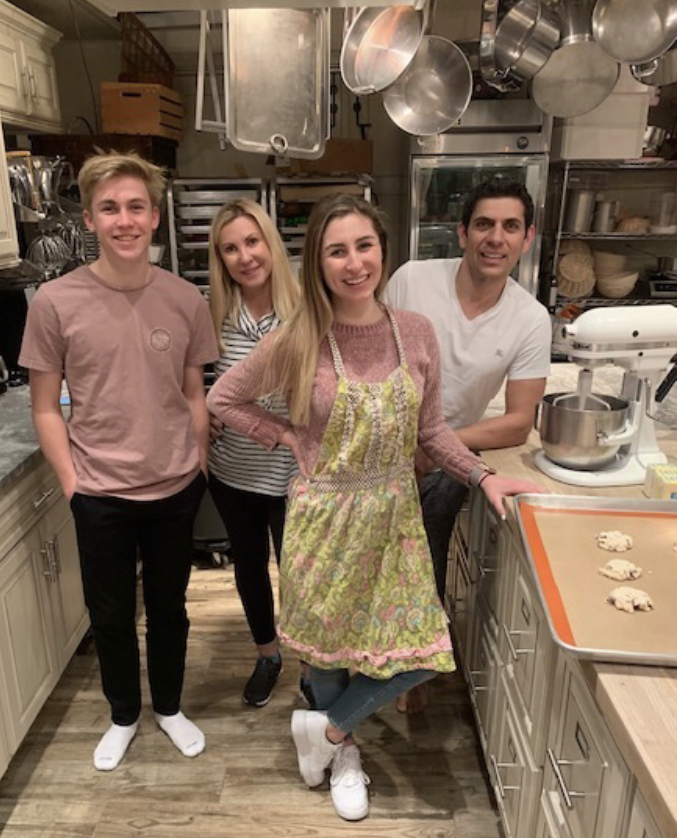 Christine and Victor Abuharoon, as well as two of their volunteers, Sofia and Jordan Votava, pose in the kitchen. While the main product is pizza dough, SMIJJ has recently began selling cookies, which can be seen on the cooking tray,

American Cancer Society, Laura’s House, The James Henry Ransom Foundation, and Meals on Wheels are just a few of the charitable causes that Christine and Victor Abuharoon, founders of SMIJJ, have partnered with. Through the sale of baked goods, the SMIJJ organization raises money and donates all of their profits to charity.

With a love for baking as well as a passion for helping others, the Abuharoons established SMIJJ, named after the first initials of their five children, as a way to incorporate both and at the same time earn money for charity and help local causes.

SMIJJ first worked alongside the Ladera Ranch chapter of Laura’s House, raising 6,000 dollars for domestic violence victims. “We decided to sell pizza dough to help some of our local organizations recoup their fundraising efforts,” said Abuharoon.

However, the Abuharoons have since expanded who they worked with and what products they sell.

“We have partnered with the American Cancer Society, Girl Scouts, Meals on Wheels, The James Henry Ransom Foundation, Gigi’s Playhouse, Yesenia’s Humanitarian Foundation, the Council on Aging, The Uzair Qureshi Memorial Scholarship Fund, as well as local schools and individual causes,” said Abuharoon. “Additionally, each year, we donate around 4,000 cookies to events for the Marines at Camp Pendleton.”

“In just 4 weeks, we have delivered 80 bags of homemade goodness to families in our local community. Vic makes sure he has enough goodies ready to distribute; I handle the administrative duties of collecting names and addresses, as well as the packaging and delegating to the volunteers; and five dedicated local teens help by delivering the bags of goodies to the families’ doorsteps,” said Abuharoon.

Thanks to all of their success, SMIJJ has donated more than 15,000 dollars to charity.

Despite the rapid expansion since the organization’s founding, the passion for cooking and helping others is still there. “I love the look on people’s faces when I give them homemade cookies or a fresh loaf of bread,” said Abuharoon.

In the future, the Abuharoons are seeking to partner with more local organizations through pizza dough fundraising. For those interested in learning more, email them at  [email protected].