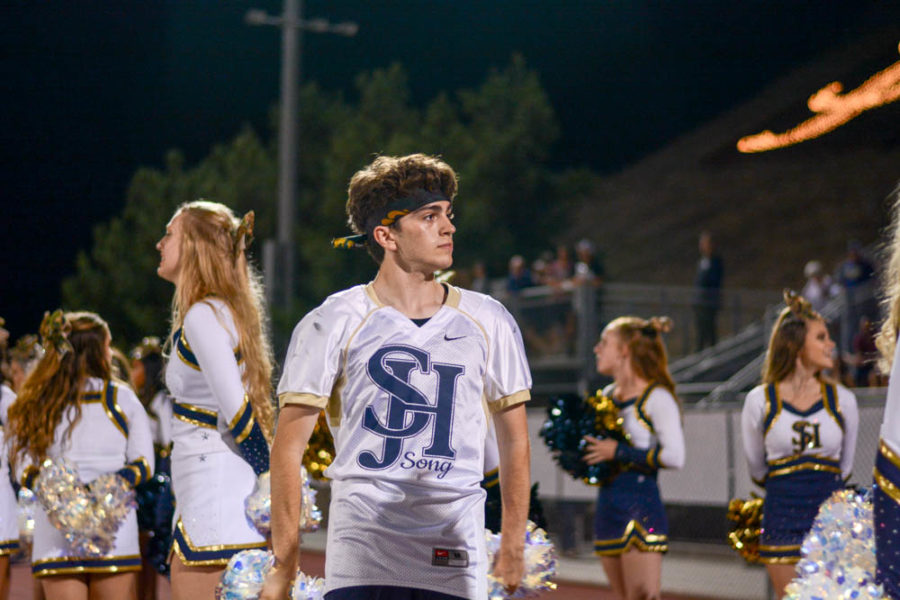 Zach Rothman (12) looks out into the stands while he cheers on the football team on September 6. He dances as well as cheers for the crowd because he is on the song team, which was created this year at SJHHS.

Among the new song team members for this year, one student stands out. Zach Rothman, an energetic senior is erasing the stigma of boys being involved in dance and cheer one routine at a time.

“I have been in dance all four years now, and I was also trying to get into cheer. When they told me they had a song team I thought that was the perfect mixture of both of them because the song is both dance and cheer,” said Rothman.

Since becoming a member, Zach has performed at most of the football games and in both the song team’s and  dance’s routines at the pep rally. He played the role of Harry Potter in the dance team’s performance for homecoming.

Although Rothman is the only boy on the song team, he has a great rapport with all of his fellow team members and feels comfortable in the dynamic.

“People have always seen me as the dance boy, and so when I say I’m on song they usually ask what it is, but then after that they think it is really cool,” said Rothman, “I am really excited for people to see the games and see song do our thing.”

Even though Rothman stands out among the members due to the obvious difference in gender, there is no special role he plays.

“All the choreography is the same and all the placement is the same, but the seniors have seniority and get to go in the front,” said Rothman, “I am not highlighted as a boy.”

In addition to the comradery he has found with the song girls, he has also developed a relationship with the song coach, Haley Reyes, who is a new member of SJHHS faculty.

“She’s really good at getting everyone to be involved and active with the team. I’m really happy with her, and she’s done really really well,” said Rothman.

Rothman initially started dancing for the joy that it brought to him, but has found it to be useful when translating a bigger message.

“I hope me joining the song team will inspire some boys to join song or dance or cheer. I’ve had a lot of cheerleaders come up to me and say what I’m doing is really inspiring, and my coach is super supportive too,” said Rothman.