Club Interacts with Marines and Underprivileged Community for Thanksgiving 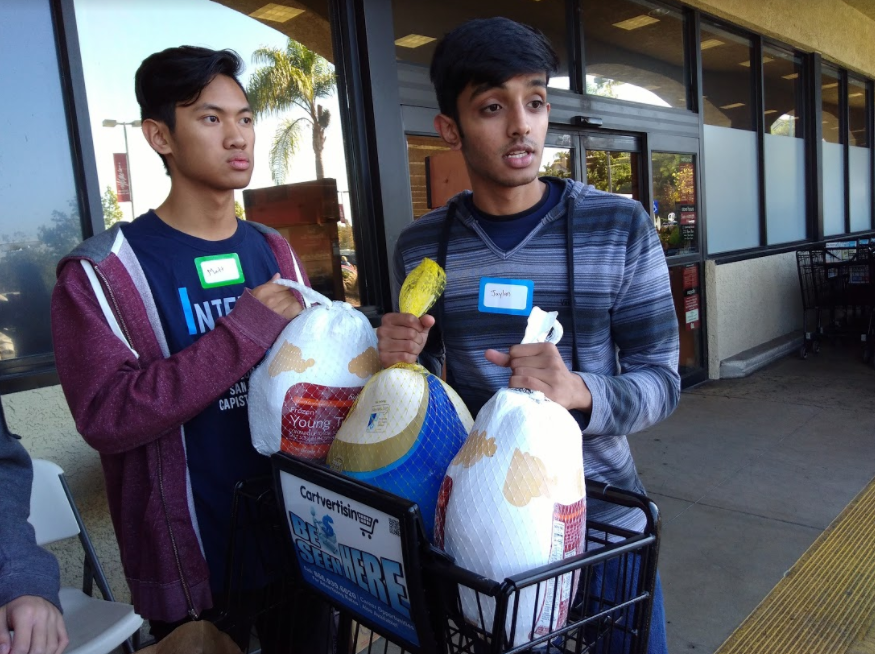 Juniors Jaylan Patel and Matt Fong hold three frozen turkeys outside a local grocery store. The boys, along with junior Brandon Tong, were invited to go in the store and fill two carts with donations, after a stranger offered to pay for everything. The club ended up collecting enough food to feed 100 families. It donated to underprivileged families in San Juan Capistrano and to the families of deployed Marines who live on the Camp Pendleton base.

On November 18, the Interact Club held their annual Thanksgiving Food Drive. The club provided the ingredients for a Thanksgiving meal to a total of one hundred families.

Interact Club is a service club on campus that works with Rotary International, a service organization for mostly retired adults. The club volunteers at many events throughout the year in addition to the Thanksgiving Food Drive, including Santa Visits and Rose Parade float decorations.

Vice President Julia Ransom said “My favorite part of Interact is the people. Everyone in the club is so friendly and hardworking. The volunteer events are 100% better because of the people you’re working with. I also love how many opportunities there are through the club. There are lots of other volunteer-oriented clubs at SJHHS, but Interact is one of the few that consistently has volunteer opportunities for its members.”

This year, club members collected donations of traditional Thanksgiving food items, like frozen turkeys and stuffing. They also accepted monetary donations, which were used to buy the items that were not donated at the end of the day. Before it was spent, they raised a total of $653 in money alone. They also collected enough food to provide food to 50 military families on Camp Pendleton and 50 underprivileged families in San Juan Capistrano.

“With the Thanksgiving food drive, you are out getting people to donate. It’s amazing to see everyone who donates and everyone who gets the food being really happy,” said junior Alma Castañeda, school liaison for the club.

The drive started at 8 a.m., where students convened in front of four different local grocery stores in San Clemente and San Juan Capistrano. They collected food for about 2.5 hours.

“I went because I just wanted to spend my time giving back to my community and hanging out with my friends,” said senior Jake Herron.

One man told juniors Matt Fong, Brandon Tong, and Jaylan Patel that they could fill up a cart with as much food as possible, and he would pay for it. He gave them fifteen minutes.

The boys ended up purchasing just under $300 worth of food. The good samaritan wished to remain nameless.

“It was really sudden, so Brandon, Matt, and I looked at the flyer and planned out what we were gonna do. It was like a football huddle, and then we ran to get as much as we could. It started getting crazy when we couldn’t find some of the items, like stuffing, so we were running around the store,” said Patel.

For the club, this was really impactful. “I learned just how generous people can be and how willing people are to give back,” said Herron.

After collecting the food, the club reconvened at San Juan Elementary School to pack and distribute the meals.

Ransom’s favorite part was “definitely at the end when we went to San Juan Elementary and got to sort and hand the food directly to the people who needed it. It’s so nice to see exactly where all the donations are going and see just how much of an impact we could make. We were so successful; we had more than enough food for everybody and were able to give extra to the military.”

The next service event for the club members will be Santa’s visit on December 16. They will be decorating cookies with underprivileged children in San Juan Capistrano while they wait to meet Santa and get a present that their parents would not otherwise be able to afford for them.

“It is amazing just to know that you are making a difference,” said Castañeda on the upcoming event.