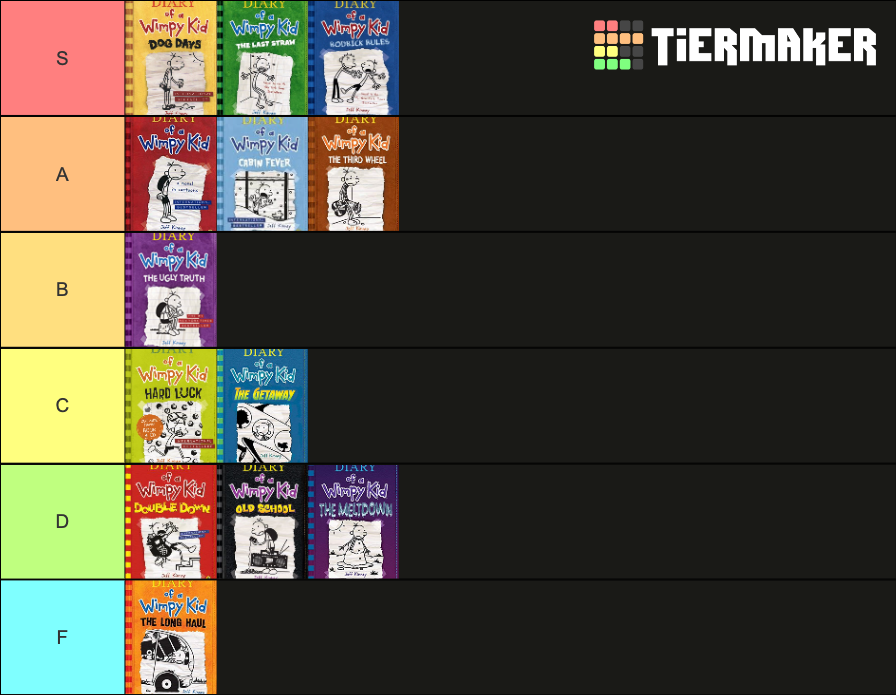 The Diary of a Wimpy Kid series was definitely favored top heavy. There was a clear decline in quality after the first 5-6 books. Graphic by Max Katz.

It goes without saying that the Diary of a Wimpy Kid series has played a memorable role in many of our childhoods. This could be partly because Greg Heffley, the main character, is a person that many can relate to more than idealize. His apparent narcissism and egotism make him an imperfect character. His superficial view of the world and social climbing nature present an insecurity that feels familiar to many adolescents. Greg Heffley was never a role model for us to look up to, but maybe we need a protagonist to look down on as well. Regardless, here is a tier list ranking for the Diary of a Wimpy Kid series.

Diary of a Wimpy Kid: The original book is one of the most memorable of Jeff Kinney’s 15 book series and arguably has the best plot. The plot centers around Greg and Rowleys broken friendship, but they face the ultimate test when confronted with the cheese touch. Rowley is forced to eat the cheese, but Greg convinces the rest of the school he has the cheese touch. A true act of bravery and loyalty. While the story has a great plot, it lacks some of the more striking humor that the other books have. This one gets A tier.

Rodrick Rules: After an excellent first edition Jeff Kinney released a banger for the second story in this series. This book is filled to the brim with quality content. It mostly centered around Greg’s relationship with Rodrick. This includes Rodrick’s van rides with Greg, a party held by Rodrick while their parents are away, and an appearance from Mrs. Heffley at the talent show. Every page of this book is timeless reading material and I will be reading it to my kids. Definitely S tier.

The Last Straw: Perhaps the best book in the series, The Last Straw is definitely underrated. I like this one because it is the only one that focuses on Greg’s relationship with his dad. From the soccer to boy scouts, to even military school threats Greg’s dad wants Greg to toughen up. Beyond that Greg’s willingness to use Rowley for any type of personal gain crystalizes itself in this book, especially regarding his crush Holly Hills. I definitely think this book has depth to it and does a good job developing their characters. S Tier.

Dog Days: Dog days features the intriguing character of Greg Heffley in vintage form. Greg racks up an $83 debt on Rowley’s country club bill, causing the two of them to start a lawn care business. When Greg tries to force work onto Rowler their friendship is again in shambles. Later on Greg is invited to the beach house with Rowley which ends when Greg taunts boardwalkers with a dollar bill trick. Greg’s selfishness and lack of a moral compass is more potent in this story than the previous ones which makes it so entertaining. Another S tier.

The Ugly Truth: I would definitely argue that there is a drop off in quality between The Last Straw and the original four. The plot centers around Greg’s experience with puberty (or lack thereof). The most memorable part is probably the middle school lock in night where Greg is disappointed to see the boys are separated from the girls. Nevertheless the reader still catches a glimpse of Gregs questionable morals, including a pet egg he ends up scrambling and his use of Rowley for status and mobility. Nevertheless this book lacked memorable humor besides the buttcrack/eblow printer incident and I definitely would not recommend starting with this book. This one goes in B tier.

Cabin Fever: The sixth edition of the Diary of a Wimpy Kid series is interesting because it explores Greg’s potential for moral righteousness much more than the first six. Examples of this are when Greg makes sure to bring a present down to the police station for charity or when he expresses empathy towards Mrs. Heffley when the snow ruins a family photo album. Seeing the volatility in Greg’s character keeps the reader on their toes. The story has some intense moments too, like when Greg vandalizes the school while advertising for a holiday bazaar (and surprisingly chooses not to eat out Rowley. This book is definitely one of the best in the series. A tier.

The Third Wheel: The plot of The Third Wheel is centered around a middle school dance, which obviously proves to be a prime opportunity to showcase Greg’s iconic narcissism. The entertaining part is the disconnect between how Greg views himself and how his peers view him. This is crystalized when Greg shows a graphic of who everyone in his grade likes and is dating, leaving him all alone. Even when Greg ends up attending the dance with Rowley and a girl named Abigail, Greg does everything he can to put down Rowley to win over Abigail. Of course this fails and Abigail ends up dating Rowley, but Greg’s unrelenting willingness to use others for status and personal gain never fails to amuse the reader. This is A tier.

Hard Luck: This book is alright. It certainly is not as bad as some of the later books in the series, but it lacks the interesting plotline that some of the earlier books have and there is little to no character development. The story contains Greg’s same old manipulation tactics and overt selfishness. The humor is also repetitive with some of the earlier books. When I read this book I have trouble differentiating it from the rest. C Tier.

The Long Haul: The family road-trip storyline is a nice change of pace from the previous stories, and the book does have some memorable moments. Overall though the main line of entertainment comes from the series of unlucky events on the road trip. The book is also brought down by the absolutely AWFUL movie. The movie features a new cast from the original three, and utilises a terrible script that relies on rude humor instead on substantive comedy. F Tier.

Old School: This one is not quite as bad as the other books later in their series. Old School is interesting because we get to see Greg hang out with a multitude of kids besides Rowley. This culminates after he decides to go to a summer camp to escape his father’s wrath after destroying the family car. Therefore we get to see a lot of Greg’s typical misfortunes, but less of mis manipulative side. Not great, but could be worse. D tier.

Double Down: The Problem with Double Down is that the plot follows very few central themes or ideas like others in the series. Instead it kind of danced around different storylines. If there is any main theme it is Greg’s sudden desire to become a movie producer. However I think this is lame compared to other plotlines in the series. One does get to see Greg’s vintage entitlement and willingness to use Rowley for success and status in regards to his movie production. Overall though this book did not have it. D tier.

The Getaway: The 12th book in the Diary of a Wimpy kid series almost feels like an exact copy of the Long Haul. We get it, Greg’s family goes on a trip and things go wrong. It is hilarious to see Greg’s inner narcissism grapple with the train wreck that his life is, but there has to be more complexity to the plot than that. This gets a C tier.

The Meltdown: The main theme here is conflict and war. A snow storm turns Greg’s neighborhood into a virtual warzone and kids are pitted against each other in snowball fights. This makes for a fun central idea and on top of that we get to see Greg and Rowley’s friendship have some of the most teamwork and chemistry thus far in the series. However the overall messages were less than memorable and the humor was lacking. D Tier.

Wrecking Ball: For the first half of the book this edition follows typical format. It goes through Gregs daily life, with plenty of anecdotes that reveal how he sees the world. For example Greg holds a yard sale and imagines how much value the sold items will hold when he is famous. However it ends on a touching note. When it appears Greg needs to move he has an emotional embrace with Rowley. What?! He must have been disappointed about not being able to manipulate him anymore. Whatever the case, this small amount of character development gives the book some needed substance. C Tier.