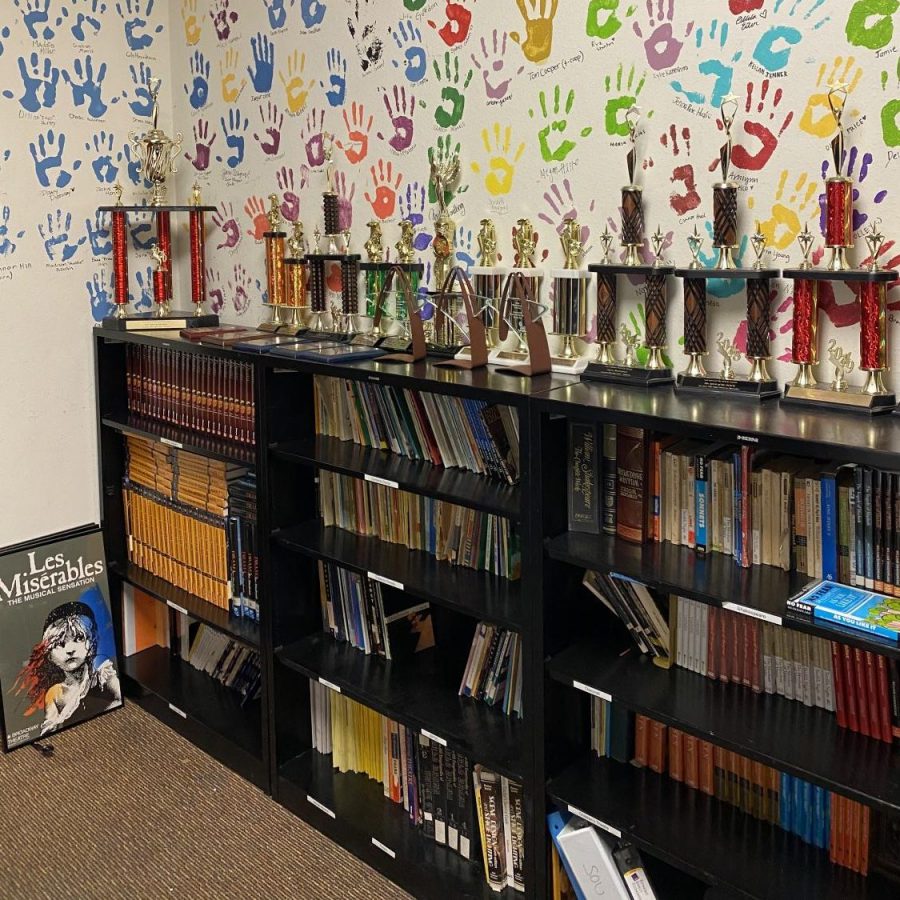 In the theatre library, there are books from and about BIPOC and LGBTQ+ individuals as well as posters of theatre plays and hand paint marks of current and former students.

For the past two years, the theater department has been hard at work to improve the inclusivity within our school community by developing a BIPOC/LGBTQ+ section for their theatre library. Cambria Graff has compiled a number of works together in order to promote equity not just within the drama department, but the school as a whole.

The library itself has existed since even before Graff began at the school in 2013. She began to develop the BIPOC/LGBTQ+ section specifically within these past two years as part of her mission to find a new way for their department to grow with each year.

“Sometimes [our mission] has to do with our technology that is available, and sometimes it’s expanding our season to include different pieces to grow our student experience and exposure, and sometimes it’s about curriculum updates and making sure materials are inclusive,” said Graff.

“This year, I wanted to focus on a greater representation and focus on BIPOC artists. So much of our curriculum I wrote for Theatre Arts does this on Canvas this year, and I’m working on expanding and identifying diversity in our library so students can access playwrights from their own identified communities during scene study in class,” said Graff.

Unlike typical libraries, Graff’s is comprised of more productions and playwrights instead of traditional books. “Currently our library has plays, 1 Act, scene books, monologues, methodology books, and actor biographies. The BIPOC and LGBTQ+ section of this library is expanding to include also all of these things,” said Graff.

Drama students are excited to identify those plays and have an entire section within the library to find such material.

During the pandemic, it has been especially hard for students to be able to experience teacher and staff attempts towards moving into a more inclusive school environment. Graff recognizes that though she has communicated to her students that the library exists, many of them have not gotten to see it on campus first hand due to online learning. She plans to begin publicizing the library once it’s fully complete.

While the drama program is a welcoming environment, Graff believes there is always room for improvement in tolerance and acceptance.

“Theatre Arts is a self identified “accepting” place- we feel like we are the open minded community that accepts everyone,” said Graff. “However, it’s important for us to understand that as long as implicit bias exists, it is our responsibility to actively look at and critique what is “normal” and push ourselves to be better, become even more inclusive- and try and break down any barriers that may be preventing BIPOC students or LGBTQ+ students from feeling like there is a place for them in our community.”

In the future, Graff hopes to enlist the help of her students to work on the library with her in order to hasten the library’s completion. Students will be immersed in the project in order to promote inclusivity even further.

As the drama department hosts musicals and plays for the entire student body to see, they’ve strived towards bettering the school environment. The BIPOC/LGBTQ+ is one example of how Graff and her students are working on moving and progressing SJHHS to feel more inclusive towards people of all backgrounds, ethnicities, genders, and sexualities.